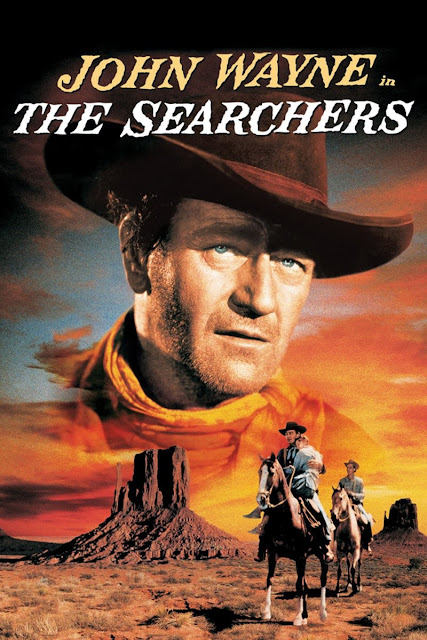 In 1868, Ethan Edwards (John Wayne) returns home to Texas after fighting for the Confederacy in the Civil War.  Initially he is biased against his brother's adopted son, Martin Pawley (Jeffrey Hunter), because Martin is part Native American.  Ethan is unapologetically racists against the Comanches.  When members of his brother's family are killed or abducted by Comanches, he vows to track down his surviving relatives and bring them home.  When Edwards gets word that his young niece Debbie (Natalie Wood) is alive, he and Martin spend over a decade trying to find her.  Ethan eventually warms up to Martin, making him his heir, but when he does find a fully grown Debbie, she is integrated into the Native American way of life and does not want to return with Ethan and Martin.  As a result, Ethan feels that she has been corrupted by the Comanches and wants to kill her.  Fortunately, by the end of the movie, his hard heart softens.


It is hard to judge this 1956 movie from a 2015 perspective.  One Native American tribe is portrayed as murderous, although other Native American individuals are portrayed as friendly.  When the U.S. Army decides to attack the murderous tribe, they make it clear that their plan is to massacre everyone without any effort to spare the innocent, although the movie does show women and children escaping.  So it is hard to determine the intent of the movie.  Is it merely portraying racism that would have existed in 1868, or is it also reflecting racist attitudes that would have been common in 1956?  If the movie is an accurate portrayal of 1868, then it should be praised for showing us history and taking a stand against racism.  I think that this is mostly what the movie is trying to do, except one cannot help feel that that the portrayal of Native Americans is too stereotyped.  I think that even though the movie is clearly taking a stand against racism, it was limited by the time period in which is was made, because the film does not stray very far from traditional western movie ideas about Native Americans.  Maybe it had to be this way to be a commercial success.

I am not sure what to make of the fact that at least one key Native American character is portrayed by a white actor.

Many critics praised the beautiful scenery in the film, which was filmed in Monument Valley in Arizona and Utah.  Having lived in Utah, I wasn't quite as impressed.  Most of these areas looked far too inhospitable for people to actually be living there, so the scenery wasn't an accurate reflection of the high plains of Texas where the story takes place.

The Searchers has a 100% rating on Rotten Tomatoes.  Roger Ebert gave the movie four stars.  I give it three and a half.