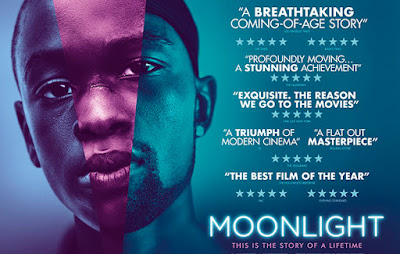 Moonlight is the story of a gay black child, Chiron, growing up under the most difficult of circumstances, and his transition to adulthood.  It won "Best Picture" at the Academy Awards.

To me the story seems very thin and kind of depressing.  The movie is about personalities.  The ending is anticlimactic and leaves us hanging, but it is about people coming to terms with each other.  As such the entertainment value isn't extraordinary, but our hearts ache for the people having to struggle in a bad environment.  That makes the movie an "issue" film, and the Academy Awards loves issue films.  It is also a movie that we are not likely to forget any time soon.

The portrayals of blacks in this film are mostly unfavorable with the exception of a couple of good characters.

Another "issue" film that won best picture was Midnight Cowboy in 1969.  What the two films have in common are slow moving stories and controversial topics.  Now, Midnight Cowboy seems dated and barely qualifies as entertainment.  I am wondering how Moonlight will seem to us a couple of decades from now?

Mahershala Ali won Best Supporting Actor for what is probably his best role yet as a drug dealer who takes Chiron under his wing.  In his previous roles he was always a little too understated.