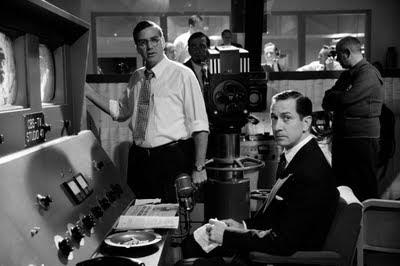 If we measure a movie by it's ability to take us to another time and place, then "Good Night and Good Luck" is the best example that I can think of.  The movie is relies more on atmosphere than plot, but that atmosphere feels like we are ease dropping on the real events as they are happening.  It is interesting how the camera will follow people around.  It creates a slight sense of confusion, but adds to the "we are there" feeling of the movie.  By cleverly showing us archival footage on television screens, we feel like the events are happening right now.  The movie never bothers to explain anything at all; it assumes that we are smart enough to keep up.  Since the film is mostly people having conversation, it adds to the feeling that we watching real events, but a few of those conversations might try people's patience.  Which is why on Rotten Tomatoes, 94% of the critics liked the movie, but only 73% of the audience liked it.
I was worried that the movie would hit us over the head with a political message about McCarthyism, as other films have, especially since it was written by the left leaning George Clooney who also gave us politically slanted duds like Syriana and Michael Clayton.  (The latter is not terrible but stretches believability.)  But if there is political bias in this movie, it is subdued and overshadowed by a very intelligent script that is just trying to present events as they were.  At one point the movie is smart enough to ask "What if we are on the wrong side?", which is an interesting question since some people today still defend McCarthy in his hunt for communists.  But I find myself not caring if the movie has a political message, because it entertains so well.
My one nitpick is that too much attention is spent on a Jazz singer who is completely unrelated to the plot.   Her singing is there just to set the mood.
Almost all the actors in the movie are television actors, many of which I have seen in some of my favorite programs.  Even George Clooney is a former television actor, so I thought that maybe the movie is trying to make some subtle point about television, but it might have just been a matter of budget.  This movie was made on a shoestring budget, but it gets its money's worth.  It is very well acted.  David Strathain blew me away with his portrayal of Edward R Murrow.
Posted by John Coffey at 12:48 AM 0 comments

Clash of the Titans

I was pleasantly surprised that I liked it.  When it came out last year the critics blasted it so badly I wasn’t expecting anything.  I put it on my Netflix queue and forgot about it.  It just came up in my queue and I watched it over the weekend.  I would have enjoyed seeing this on the big screen.

Have you seen this trailer?  I think that Harrison Ford looks more like Geoffrey Lewis.
http://www.youtube.com/watch?v=oXHhnT1tHNM