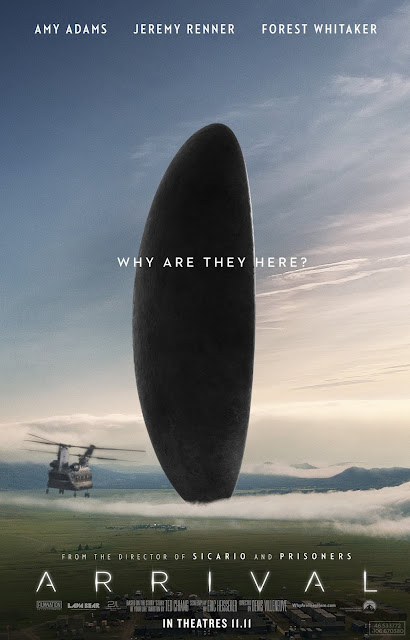 The trouble with aliens from another world is that they are alien.  We might have less in common with them than we do with horseshoe crabs, and we might have an easier time communicating with the crabs.  This is the problem faced by the main character of Arrival, Dr. Louise Banks, played by Amy Adams, who is a linguist who must figure out how to communicate with these aliens that have mysteriously turned up on our doorstep.  If this were the entire plot, then the film probably wouldn't be that interesting, but the story has a few twists.  There is also a significant side story about Dr. Banks losing a daughter to illness.

All the focus is on Amy Adams.  The movie also stars Jeremy Renner as a scientist, and Forrest Whitaker as a general, both of which are good actors, but neither seem particularly memorable here.  Renner plays a stereotypical scientist who becomes the love interest for Dr. Banks, and Whitaker's character seems like a token general.

There is only so much you can do with aliens in a movie.  For this reason, most alien movies tend to be more about us than they are about the aliens.  It is more about how we react to the discovery of alien life than it is about the aliens themselves.  The film follows a predictable pattern where the human race wants to respond to the aliens with military force.

At times the story moves too slowly as the movie tries to keep us in suspense, but this builds up to a very clever ending that surprised me.  So it is not a perfect film, but I do think that it is very good.  This is probably one of the better movies in the theaters right now.

Arrival has a 93% rating on Rotten Tomatoes.

P.S. I was thinking that the movie has a certain low budget quality about it. It is probably not that difficult to generate computer special effects of aliens, ships, and military vehicles. I just looked up the budget of the film, which is 47 million, which is not particularly high for a science fiction film. I thought that the characters played by Whitaker and Renner could have been flushed out more. Still, the overall effect is a good one.