I am surprised that I haven't seen this before.  It is pretty impressive.
https://en.wikipedia.org/wiki/TIE_Fighter_(film)
Posted by John Coffey at 11:49 PM 0 comments 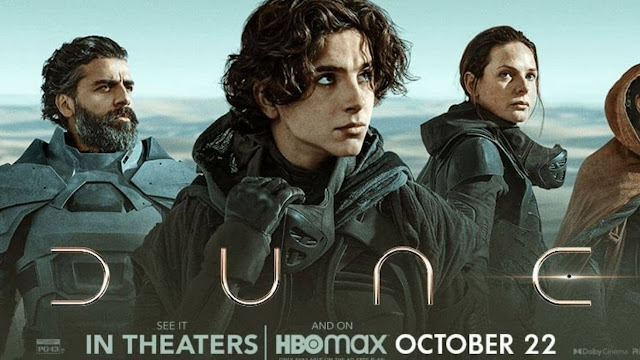 In the distant future, a war emerges between powerful political dynasties on the desert planet Araknis over the control of the mining of Spice, which is needed for interstellar space travel.  The Atreides ruling family tries to align itself with the indigenous population known as Fremen.
I read the entire series of Dune novels in the 1970s.  Since Frank Herbert tended to write imaginative, complicated, and downright weird novels, I thought that a movie adaptation might be difficult.  The 1984 movie was okay for its time, but it fell flat with audiences.  The film was too complex and too esoteric.
Three minutes into Dune, the title screen reveals that this 2.5-hour movie is only part 1.  I was disappointed at first, but it is better this way.  Dune is so complicated that you need a roadmap to keep up.  The film doesn't skimp on detail.  It provides a very rich story faithful to the book, which is maybe why it only covers about half of the first novel.
The script feels perfect.  Parts of it drag on a bit because there is much detail to cover.  The movie adds many scenes to make it more cinematic, so it feels more like a 21st-century film.
The performances are good, but the complexity and weirdness of the story overshadow everything else.   Timothée Chalamet is a bit subdued as the main character Paul Atreides, but Jason Mamoa (Aquaman) stands out as the soldier Duncan Idaho.
Posted by John Coffey at 11:47 PM 0 comments

No Time To Die - The End Of James Bond

Borgnine returned to his parents' house in Connecticut after his Navy discharge without a job to go back to and no direction. In a British Film Institute interview about his life and career, he said:

After World War II, we wanted no more part in war. I didn't even want to be a Boy Scout. I went home and said that I was through with the Navy and so now, what do we do? So I went home to mother, and after a few weeks of patting me on the back and "You did good," and everything else, one day she said, "Well?" like mothers do. Which meant, "All right, you gonna get a job or what?"[19]

He took a local factory job, but was unwilling to settle down to that kind of work. His mother encouraged him to pursue a more glamorous profession, and suggested to him that his personality would be well suited for the stage. He surprised his mother by taking the suggestion to heart, although his father was far from enthusiastic. In 2011, Borgnine remembered,

She said, "You always like getting in front of people and making a fool of yourself, why don't you give it a try?" I was sitting at the kitchen table and I saw this light. No kidding. It sounds crazy. And 10 years later, I had Grace Kelly handing me an Academy Award.