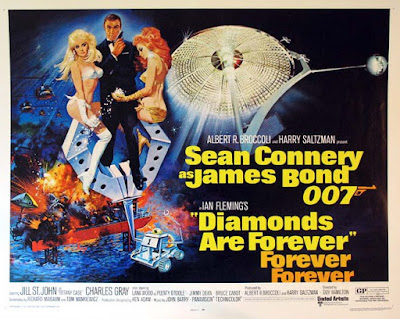 I decided that I would catch some James Bond films I had not seen before, although it turns out I had previously seen a small portion of Diamonds are Forever on cable TV.  Rolling Stone ranked the movie as #18 out of 24 Bond films, and I can see why.  This is an immensely absurd story, even for James Bond, about an overly convoluted diamond smuggling ring, where the diamonds are destined for a killer satellite in space.  About half the movie takes place in Las Vegas, which seems to serve no other purpose than to drag the movie out while promoting Las Vegas.

The characters of Mr. Wint and Mr. Kidd are a pair of assassins, apparently inept at their job, who are clearly a gay couple.  This seems kind of daring for 1971.  They are always making humorous quips, and their presence makes the movie more interesting.

Diamonds are Forever was received somewhat favorably in 1971.  It has a 67% rating on Rotten Tomatoes, and Roger Ebert gave it a favorable review.  The movie has several interesting things that happen, and compared to other films in 1971, it might have been above average.  However, today it feels so dated and so absurd that it would make a decent Austin Powers parody.  With the right attitude one can enjoy the movie because there is some value to seeing old James Bond films to get a historical perspective, and despite the silliness of the film, Sean Connery has a screen presence that makes you want to keep watching.