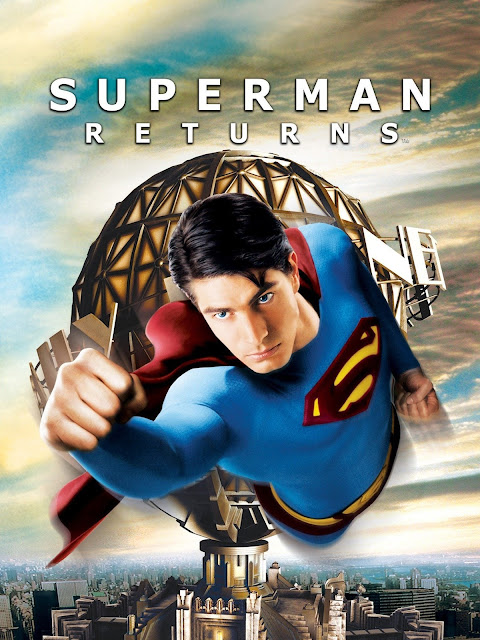 I feel like Superman Returns gets a bad wrap.  Roger Ebert said, "This is a glum, lackluster movie in which even the big effects sequences seem dutiful instead of exhilarating."  On the other hand, Richard Roeper said, "... while I can't call it a home run, I'll say it's a solid base hit."

Perhaps the problem with the 2006 film is that it was an attempt to make a more modern Superman movie.  Something that fits into a post 9-11 world.  It has a more realistic feel to it compared to the 1978 original, although the year 2006 no longer feels modern.  The movie is starting to feel dated.

I like the movie. I like the many themes it touches on. I love Kevin Spacey's performance as Lex Luthor. Somehow the execution is faulty. Its ideas are better than its implementation. Everything rushes by too quickly.

The film really is a bit more glum.  It turns into a well-made soap opera.  There is an extreme emphasis on a love triangle between Superman, Lois Lane, and her new husband, as if dealing with relationships makes the movie more modern.  It is a more emotional take on Superman, but interesting nevertheless.

For a movie with a 200 million dollar budget, I would have expected more. It doesn't look as good as it should. Most of the film is too dark or too murky. However, it still makes for passable entertainment.

The movie sets us up for a sequel that never came.  Superman Returns was supposed to be a reboot of the franchise, which got rebooted again in 2013 by Man of Steel.  Apparently, this wasn't the Superman we were looking for.

The first Highlander movie was barely okay.  I enjoyed the TV series, although it was also just barely okay.   I think that both are probably dated by now.
Reportedly all the sequel movies that followed were very bad.  It is a shame because none of this immortal crap makes any sense.  I was hoping for a good resolution that would also explain everything.
Clancy Brown is one of my favorite actors.
Posted by John Coffey at 12:26 AM 0 comments