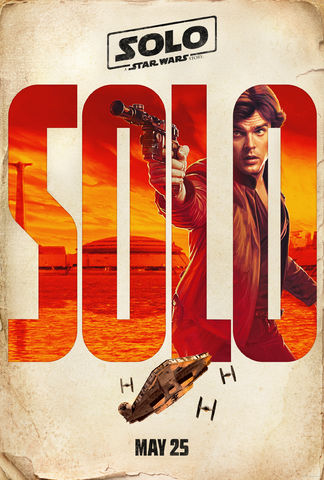 Solo:  A Star Wars Story feels a bit like a history lesson, filling in the backstory of Han Solo, for example letting us know how Han Solo met Chewbacca, met Lando Calrissian, acquired the Millennium Falcon and completed the Kessel Run in 12 parsecs.

That sounds like fun, and mostly it is.  I was really enjoying the movie until the ending.  What's wrong with the ending?  Nothing major.  However, despite the movie feeling slightly too long, the ending wraps up the plot threads a little too quickly and too easily.  For me, it felt kind of forced.  That's when I realized that Solo: A Star Wars Story seems kind of average and not particularly special.  It is mostly a heist film in space with space gangsters.  You could have had the same story in another setting that didn't have anything to do with Star Wars, like a western.  The film as given doesn't really add anything to the Star Wars saga.  It slips in a couple of easter eggs that have implications for the Star Wars story in general, but they weren't significant enough for me to care.

There is a big reveal at the end of the movie that sets up a sequel, but the reveal isn't too surprising to anyone who has watched the Star Wars The Clone Wars animated TV series.

As far as characters are concerned, again I don't feel like we got anything special.  Chewbacca is probably the most interesting character in the movie.  Alden Ehrenreich is passable as a young Han Solo, but he is too bright eyed and bushy tailed.  He is green and lacks any kind of hard edge that we would expect from Han Solo.  Lando Calrissian as played by Donald Glover is good, but none of the other characters really stand out; they feel ordinary, just like the story feels ordinary.

Even when I watched Star Wars: The Last Jedi, which if we are to believe Rotten Tomatoes was hated by half the fans, I felt like I was watching something truly special and significant to Star Wars.  With Solo, we get a story we didn't need that is kind of forgettable, with a great many characters that we only partially care about.  Perhaps one problem with the movie is that it has too many characters.

The movie had production problems and its budget exceeded 250 million dollars.  For that kind of money, my expectations for the film were a little higher than what we got.   The movie is entertaining enough, but that is all it is.  Star Wars deserves better. People go to see Star Wars movies because they are exceptional, not because they are average.  Part of the problem is that Disney is making too many Star Wars movies, so the quality of the storytelling is being diluted.

Solo has a 69% rating on Rotten Tomatoes.  My favorite movie critic, Richard Roeper, gives the film three and a half stars.
Posted by John Coffey at 1:29 PM