Why the Music in Cats (2019) is Worse than you Thought

I tried to give the movie a chance.  This is far more analysis than most people would want to spend time on, but at least now I know why the movie sucks.
Posted by John Coffey at 12:39 AM 0 comments 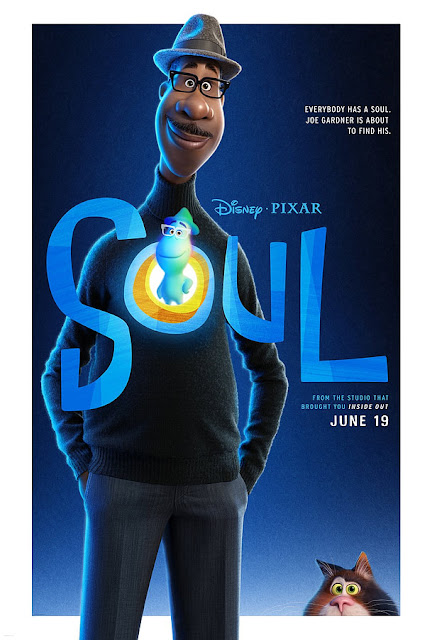 "Soul" was scheduled to be released on June 19, 2020, but at that time the only open theaters were a few drive-ins.  It would probably have been one of the top-grossing films of the year, but it got pushed back to November and then pushed back again to December 25th just on the Disney+ streaming service.
In the 1943 movie, "A Guy Named Joe", the main character is a fighter pilot who is killed in his last mission before becoming a flight instructor.  In Heaven, he is told that he must return to Earth to become the spiritual inspiration to a young flight trainee.  This movie was remade in 1989 as Steve Spielberg's "Always", with Richard Dreyfus as the departed pilot.  One critic called "Always" the best movie Steven Speilberg has ever made.
These films may have been an inspiration for the movie "Soul."
Joe Gardner, a middle school music teacher who is unsatisfied with his lot in life, gets his big break when he gets a chance to perform as a backup musician for a famous jazz singer.  However, before he can play his gig, he accidentally falls into an open manhole.  He finds himself in the soul dimension on a conveyer belt taking him to "The Great Beyond."  However, since Joe didn't get to play his big break, he doesn't want to go.  He escapes the conveyer belt only to fall into "The Great Before", a place where new souls are being prepared for their journey to Earth.  Here he is given the job of inspiring "soul number 22", who is a particularly recalcitrant soul who doesn't want to go to Earth.  For 22 to get to Earth, she first has to find her "spark", which she stubbornly refuses to do.  Joe is more interested in finding a way to cheat the system so that he can return to his body on Earth, which is in a coma in the hospital.  He accidentally falls to Earth with 22, and her soul ends up in his body and his soul ends up in the body of a cat.
I have seen people criticize this body-swapping plot because it has been done before many times in other movies, and even though it is perhaps the weakest part of the movie, it also gives Joe the cat a chance to inspire 22 to want to live.  He almost succeeds, but complications get in the way.
Some of the scenes in the soul dimension are very beautiful, so I would have liked to have seen this movie on the big screen.
"Soul" is a very beautifully made film whose ideas are stronger than their implementation, but as a movie, it is borderline great.  It is very rewatchable and emotionally touching.  It ponders some great ideas about the meaning of life, but it might be a little too deep and too introspective for kids to fully appreciate.
Rating:  A-.
Posted by John Coffey at 12:37 AM 0 comments

I remember liking Watchmen, but I'm not sure that I would want to sit through it again.  There was a certain novelty to the concept of flawed superheroes, but this no longer seems like a novel concept.
Posted by John Coffey at 9:56 PM 0 comments

Leaked! The Magnificent Episode 9 We Never Got to See