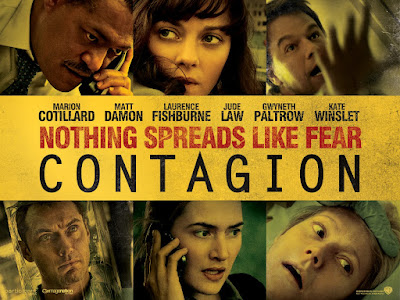 I rewatched "Contagion" after seeing it in the theater when it came out ten years ago.

I have never seen a more prophetic movie in my entire life.  At least 80% of the film seems applicable to the current COVID-19 pandemic.  The biggest difference is the deadliness of the disease, which instead of being about 2% for known cases is around 25%.  But detail after detail comes up that I only recently learned about during the COVID crisis.

The movie has an 85% rating on Rotten Tomatoes, although not all the critics were equally enthusiastic.  The audience score is only 63%, so I suspect that the subject matter might have turned off some people.  Rotten Tomatoes describes it as, "Tense, tightly plotted, and bolstered by a stellar cast.  Contagion is an exceptionally smart -- and scary -- disaster movie."   I agree.  It tells a fantastic story.  My favorite movie critic, Richard Roeper, gives it 5 out of 5 stating, "Contagion" is a brilliantly executed disease outbreak movie."
The film puts much emphasis on how easily disease can spread and this adds to the tension.
The ending is great, giving a nice emotional catharsis followed by a revelation about how the pandemic started.