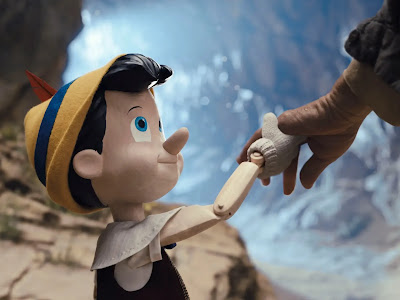 The problem with the 2022 "live-action" Pinocchio is that it fails to justify its existence.  I say this having watched only about the first 20% of the movie.  The 1940 version of Pinocchio has a 100% rating on Rotten Tomatoes, and for a good reason; it is a triumph of Disney animation.  It is perfect.  Over the last few decades, there have been several second and third-rate Pinocchio movies, but why do we need to watch any of them when there is a much better film that might possibly never be surpassed?

The term "live-action" is a bit relative since the Pinocchio character and other characters like "Honest John" are computer animated.  I am biased since I watched the so-called "live-action" The Lion King and that movie is a scene-for-scene imitation of a much better original, which was just barely as long as it needed to be at 90 minutes to tell an effective story.  The remake was 30 minutes longer and failed to utilize as well the Oscar-winning music from the original.
The Disney computer-animated remakes are a triumph of technology, but I don't go to the movies to watch a video game.  The Lion King remake looks amazingly good, but so does the original animated film.
The dilemma is that The Lion King remake is 80% as good as the original, which technically makes it a good movie, but why do we need an inferior version of a nearly perfect film?  The Pinocchio remake feels like a good effort, but it still falls short, and there is almost no way that it could have lived up to the original.
It appears that the Disney corporation thinks that we will watch anything just so long as it is new and a little bit different in some way.
Pinocchio began to lose me during the early cuckoo clocks scene, which in the original was a triumph of animation and humor.  The new versions of the clocks feature many Disney characters, turning the scene into a commercial for other Disney movies.  But then I gave up on the film, at least for now, after a scene where Pinocchio is walking to school and encounters a pile of excrement in the street.  Since Pinocchio hasn't been alive for very long, he doesn't understand what this is and is fascinated by this new experience.  However, if this is the case, why isn't Pinocchio fascinated by a hundred other things in the street that he hasn't seen before?  The scene with the excrement is a bit jarring and feels out of place in a fairy tale.
The fact that Tom Hanks plays Gepetto is interesting and really caught my attention.  He gives a good effort, but I found his presence distracting.  I kept thinking about how the character is played by Tom Hanks.  The movie would feel more authentic, and believable, with an older Italian actor.
Posted by John Coffey at 11:24 PM