Good Will Hunting (Rating: B+) 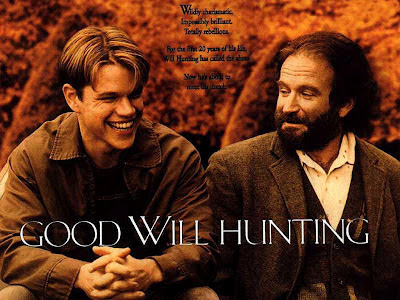 Good Will Hunting is one of those movies I heard about but never got around to watching until now.  It was nominated for 9 academy awards and won 2.  Recently I saw a clip which intrigued me.

Will Hunting is a 20 year old punk, former orphan, who gets into fights, is on parole, works as a janitor, and happens to be a mathematical super-genius.  When he is discovered by a MIT college professor, the professor makes a deal with a judge to keep the boy out of jail and to get the boy into counseling.  Will Hunting is defiant to anyone who wants to help him and isn't willing to embrace that he might have a higher potential.

The counselor is played by Robin Williams, who is surprisingly somber for Robin Williams, although he does sneak in a couple of jokes and one impression.   Will Hunting is played by Matt Damon, who is great in every movie he is in.  He co-wrote the script along with his co-star Ben Affleck, and it is a pretty smart script.

However, I had a little trouble believing the "punk is really a super-genius but wants to stay a punk" story.  If the guy is so smart, why hasn't he tried to make a better life for himself?  Real geniuses are driven to do the things that they are good at.  In this movie, everyone wants to hand Will Hunting success on a silver platter;  All he has to do is be willing to take it.

There are way too many movies about people who are infinitely more talented than everybody else and succeed without making any real effort.  The first half of Ice Castles is an example that comes to mind.  The real world is full of talented and smart people, but few are successful in a big way, and none succeed in a big way without a great deal of hard work and maybe some luck.

If it wasn't for all the foul language and sexual references, this could be a pretty good PAX-TV movie.   There is a pivotal psycho-babble moment when the counselor tells Will Hunting over and over "It's not your fault" until finally Will Hunting breaks down and drops some of his defiance.  In some respects this movie is a Rocky equivalent, where a no-name low-life finally starts to make good.  Like Rocky, the movie is full of colorful inner-city characters.  Like Rocky, the story was written by the leading actor who was relatively unknown prior to the movie.  This is the movie that made Matt Damon a star, and he is one of my favorite actors.

I think that it is a pretty good movie.  The colorful cast of characters makes the movie intriguing.  This movie is mostly about personalities and there are plenty of interesting personalities to enjoy here.