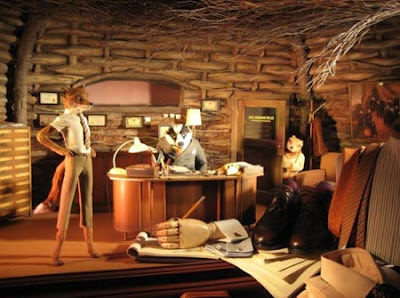 Fantastic Mr. Fox is a 2009 stop motion animated film based on an English children's book.  It might have been an interesting book, but the movie seems slow and not very compelling.   Nothing in this movie seems very funny to me, which is why the movie is pretty dull.

The characters are a little too much like human characters, wearing suits, writing stories, and selling real estate.  The plot focuses on how Mr. Fox keeps getting into trouble because he can't stop stealing from the humans, which is something that he is very good at, but some of the humans are pretty nasty.  The animation is somewhat jerky and portions of the movie look very two dimensional.   Roger Ebert liked it, but I can't see why.  Mr Fox is voiced by George Clooney.  Perhaps the movie is a metaphor for either a mid life crisis or finding out who you really are.   Rating:  C-. 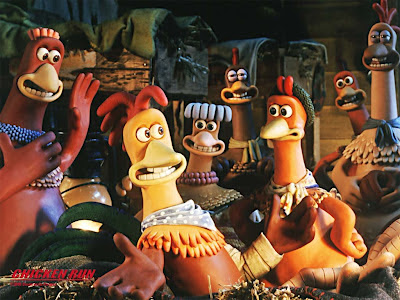 Chicken Run is a 2000 stop motion clay animated film that looks smooth and three dimensional.  The characters are interesting, and there are occasional funny moments.  The story is a compelling one about how the chickens want to escape their imminent doom.  Mel Gibson voices a visiting rooster, who the chickens mistakenly think can fly.  They hope that he can help them escape.  Rating:  B+.  Roger Ebert likes this one as well.