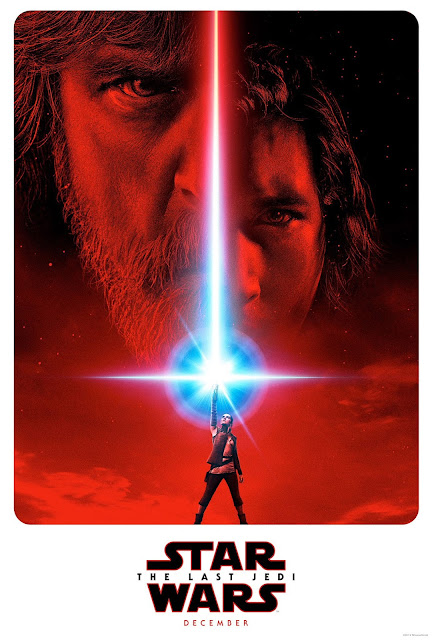 This will be my final review of Star Wars: The Last Jedi, having seen it for a second time.  It is the middle film of the third Star Wars trilogy.  This trilogy along with some anthology films are being made because Disney bought LucasFilm in 2012.

There is something special about seeing these movies a second time, because generally what happens is that any flaws that might exist become less noticeable or at least easier to ignore.  In addition, you notice new things with each viewing.  This was definitely true for watching Star Wars:  The Force Awakens, which had a few problems, not the least of which was that the story was somewhat a remake of the original Star Wars film, and the movie is so stingy in providing the audience with information that it made it feel like it was full of plot holes.  The other major complaint was that the main character, Rey, was so talented in everything that it made her feel like a "Mary Sue", which is a character that is so perfect in everything that the character becomes annoying or unbelievable.  However, especially on my third viewing of the film, I began to understand Star Wars:  The Force Awakens better and really appreciate what they were trying to do, even if it did have a few flaws.

Whereas Star Wars:  The Force Awakens in many ways copies the original film, A New Hope, the new movie contains some elements similar to both The Empire Strikes Back and Return of the Jedi.  Having already copied many things from the entire first trilogy, the next movie might have to do something completely different.

After seeing Star Wars: The Last Jedi two weeks ago, I watched videos on youtube every day where people complain about different aspects of this film.  A large number of people actually hate this movie, but these are usually the die-hard fans who feel the movie strayed too far from its roots by slightly changing the Star Wars mythology.  Plus the new film, like its predecessor, still has some plot holes.  Furthermore, even though people were counting on it to fill in information missing from the previous movie, it only provides enough information so that the audience can follow along.  There are questions that we may never get an answer to, such as the origin of Snoke, although it has been hinted that some of these questions may be answered in upcoming Star Wars books, which is an annoyingly clever form of marketing by Disney and Lucasfilm to get you to buy books.

There were three other major complaints about this film.  The first is in the way the character Luke Skywalker is handled because he is no longer a hero.  After experiencing a major setback, Luke abandons his friends, the rebellion, the Jedi Order, and The Force.  Even the actor Mark Hamill repeatedly complained about this.  The second complaint is that many people feel like the movie is hitting us over the head with Social Justice Warrior messages, which seems pretty obvious when watching it.  The third complaint is that the movie has too many moments of levity.  It is not a comedy, but it really pushes the humor, most of which works, but some of it falls flat.

Given all the negativity, I about convinced myself Star Wars: The Last Jedi might not be worth a second viewing, despite feeling thoroughly entertained and emotionally moved the first time around.  I was worried that the flaws would stick out too much.

I have never been so happy to be wrong.  Sure the film has a few flaws, as many movies do, but the second time around is still very entertaining and emotionally moving.  This drowns out any plot holes, political agendas being pushed, or confusion the movie has caused the audience about the characters.

The one thing that the film does well is to defy all audience expectations, and that makes it more entertaining.  At one point Luke says to Rey, "This is not going to go the way you think."  Well, that describes the entire movie, which is maybe why some people have a problem with it.  To some extent, it breaks the mold of what a Star Wars movie could or should be, but the result is kind of special.  It is also rich in texture; I noticed way more things on the second viewing.  There is so much that happens that goes by very quickly.

The movie is a fitting send-off for the late Carrie Fisher.  Although she does not have a ton of screen time, it is enough, and her performance is more interesting than in the previous movie.  Her daughter, Billie Lourd, also has a more active role in this film.  The end credits have this dedication:


In loving memory of our princess,
Carrie Fisher.

The movie could have ended one minute sooner than it did, but the final scene is like a bonus, involving a young boy we saw earlier in the movie.  This scene is magical, but you can see the Disney influence in it.

Although Star Wars: The Last Jedi may stray a little from its Star Wars roots, every time it quickly returns to its roots making it feel like a pretty good Star Wars film.  As a die-hard Star Wars fan, the movie very much appeals to me, but it seems also to have been designed to appeal to a much wider audience, and not just the Star Wars fanatics.  As such, it is a very entertaining movie, but there are some noticeable flaws.  For this reason, I can't give it four stars.

P.S.  Both times the audience applauded at the end of the film.  That tells you something.