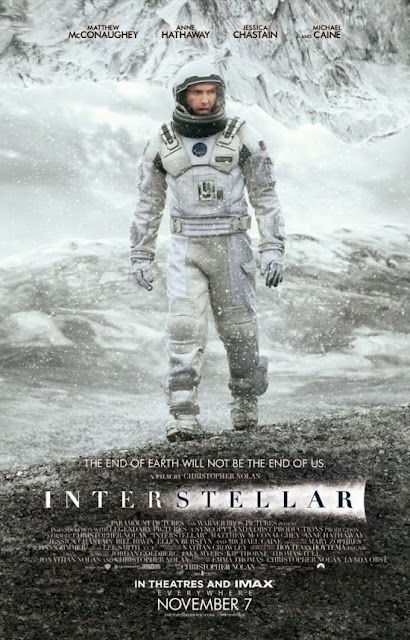 I have an idea;  let's write a science fiction movie.  First, we will make a list of as many cool things as possible to put in the movie.  We want several scenes reminiscent of 2001:  A Space Odyssey.  Check.  Let's make the main character a farmer, but he is really an astronaut.  Check.  Let's put the world in an environmental crisis.  Check.  Give the farmer a cute ten-year-old daughter who doesn't understand why her father has to abandon her in order to go save the world.  Check.  Add in a kind grandfather.  Check.  Let's have a black hole and a wormhole.  Double check.  Describe love as a natural physical force.  Check.   We can surprise the audience by having an uncredited major Hollywood star show up in the middle of the movie playing a highly respected scientist who really turns out to be evil.  Check.  Throw in a really cool robot, unlike anything anyone has seen before but is also reminiscent of 2001:  A Space Odyssey.  Check.  While we are at it, create some scenes that couldn't possibly happen, some time travel paradoxes and a couple of plot twists that don't quite make sense just to confuse the audience.  Check and mate.

I no longer care.  Whatever the movie is attempting to do, it does it superbly.  This is one well executable movie.  Despite any problems the film has, it is an amazing ride for the audience.

In my original review, I said that the movie feels like it recycled parts of 2001: A Space Odyssey, Gravity, and Frequency.  I think that the producers wanted to recycle some old elements to play it safe, but the movie is still loaded with original ideas.

There is so much good stuff in this movie that people will want to see it over and over.  After my second viewing, I am changing my rating to A-.