Star Wars Episode VI: The Return of the Jedi * * * 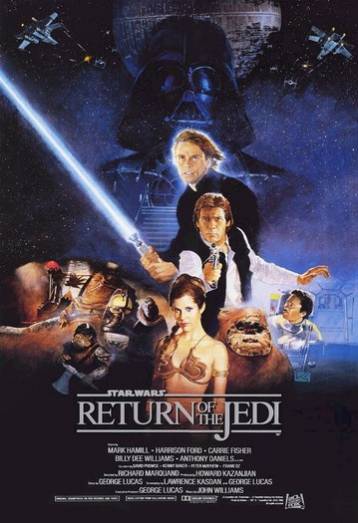 The Return of the Jedi is the least impressive of the Star Wars movies and was somewhat controversial when it was released because it was more geared toward children than the previous films.  The introduction of the teddy bear like Ewoks put off some people, and with the final scene featuring singing Eworks, I felt like George Lucas had damaged Star Wars forever.  Fortunately, in later editions of the film, the Ewok singing was taken out.

Nevertheless, it is a satisfying conclusion to the 6 movie series.   The events that happen here are interesting and necessary to conclude the story.  The best scenes are the rescue of Han Solo, a high speed chase through a forest, the Death Star battle, and the final confrontation between Luke Skywalker, Emperor Palpatine, and Darth Vader.

Mark Hamill does a really impressive job portraying Luke Skywalker in this film.
Posted by John Coffey at 4:33 PM