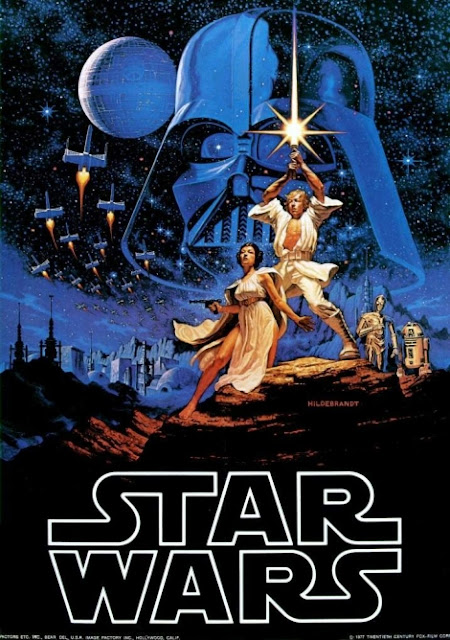 In 1977 this movie was released just as "Star Wars."    The film borrows ideas from Samurai movies, westerns, old war movies, 1930's serials,  Laurel and Hardy, and even The Wizard of Oz.  It is also inspired by The Hero with a Thousand Faces and the cold war.  Despite enormous production problems, and a cast and crew who refused to take the movie seriously because they thought that it was just a "kiddie film", George Lucas stuck to his mythical vision as best as he could, and the final result was a near perfect film for its time.  One of the Fox executives broke down and cried when he saw the screening, saying that it was the greatest movie he had ever seen.

Presumably George Lucas went to Hawaii to hide because he thought that the movie would be a flop.  Instead it was the highest grossing film for a few years.  It also started the greatest film franchise to date, and made famous the cast, the most successful of which is Harrison Ford.

But George Lucas could not resist tinkering with the film later.  The 1997 Special Edition added improved special effects, extra scenes and minor changes.  The most controversial of these changes is where Greedo shoots at Han Solo first.  This is almost universally met with disapproval because it takes away from the rogue image of Han Solo.  Other minor changes were made in the DVD version, and more changes are planned for upcoming Blu-Ray and 3D releases.  It is unlikely at this point that you could see the original Star Wars as it appeared in theaters, unless you have an old video tape copy, but I am happy with the DVD version, which is the current standard for the film  The upcoming Blu-Ray release may become the next new standard version of Star Wars.

I have seen the movie somewhere between 10 and 12 times.  I have lost count.  I found myself wondering if I would be bored seeing it one more time?  Apparently not.  I found myself quite caught up with the film.  My only criticisms are that:  1.)  It takes a while for the story to get going.  We don't meet Luke Skywalker until exactly 15 minutes into the film, and Luke doesn't decide to leave his home until 30 minutes into the movie.  2.)  The last third to half of the movie is almost all action, and as good as that is, it leave less room for character development, which is done better by the next movie.

The original movie trailer is actually pretty dreadful and does not do justice to the film.