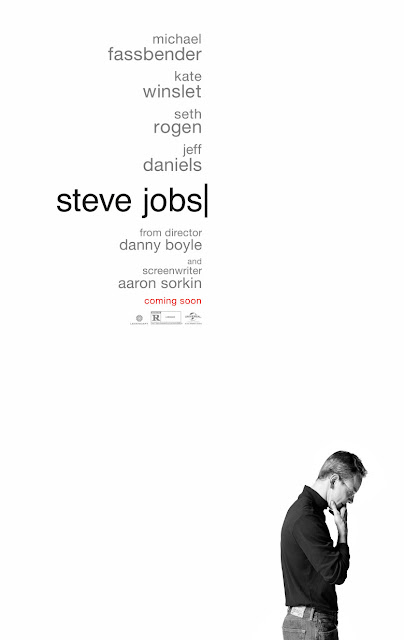 The news article Basically, nobody went to see the new Steve Jobs movie seems prophetic because I was the only person in the theater watching the movie.

This is an amazing biopic, but at first I couldn't figure out why I like the movie so much.   The film is about 98% conversation, almost all of which is people arguing with each other.   What makes the film interesting is that everything proceeds at a rapid pace, which means the audience is forced to pay attention to keep up.  When the film was done, I felt like I had just seen something wonderful, but I wasn't sure why.


The movie throws technical terms around that would go over the heads of most people, but for a computer hacker like me, this was gravy.  There is a certain joy in being able to understand all of this.

Really the movie is about relationships, specifically how Steve Jobs related to everyone else.   The way Steve Jobs related to everyone is to be a jerk, mostly by lashing out at people, but at the same time, he seemed to draw everyone toward him with the power of his personality and his vision.   Steve Jobs seemed like a man who thought that he was so far above everybody else that he didn't need to take time to be nice to people, so the key is to realize that the only thing he only cared about was is make his vision a reality.  Had Steve Jobs been any different, would the world be a lesser place today?

Steve Jobs vision was always ahead of the technology of the day.   All the early computers his companies created were underpowered, lacking in memory, not very useful for anything productive, and way overpriced.  This is why the Macintosh and the NeXT computers were commercial failures.   It wasn't until Jobs returned to Apple in 1997 that the cost of technology had come down enough to make Jobs' vision a runaway commercial success.

This is one of the best movies of the year and nobody is watching it.   However, this is an amazing movie.  I want to see it again.

Steve Jobs has an 85% rating on Rotten Tomatoes.
Posted by John Coffey at 10:34 PM