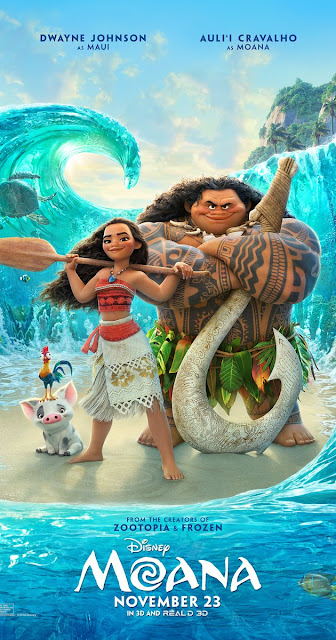 About 5,000 years ago, indigenous people from Taiwan sailed to, and settled islands off of southeast Asia.  They must have been good sailors and good navigators, because they spent a couple thousand years spreading their population to a thousand islands in the vast south and central Pacific Ocean, including Hawaii.  These are the Polynesian people.  It is their history that the movie Moana understands and pays tribute to.

According to Joseph Campbell, hero mythology everywhere has certain traits in common, such as:  The protagonist is young and goes on a journey, is taught by an elderly wise man or wizard, has a vision, faces great danger, fails, sometimes dies and is resurrected, returns to battle, is finally victorious and returns home a hero or a king.  Sometimes the protagonist is a demigod, such as Hercules.  For example, George Lucas was inspired by the writings of Joseph Campbell when he created the hero character of Luke Skywalker.

The movie Moana is based on Polynesian Mythology, and follows the above narrative very closely.  Moana is the daughter of the chief on the island Montunui.  She feels herself drawn to the sea, but her father has forbidden her to venture out to the sea because it is dangerous.  She has been told legends about how the demigod Maui stole, and lost, a small pounamu stone that is the mystical heart of the island goddess, Te Fiti.  Because of this theft, a blight is spreading to all the islands.  The sea gives the pounamu stone to Moana, and her elderly grandmother tells Moana that she is "the chosen one" to find Maui, and force him to return the stone to Te Fiti.  Then Moana disobeys her father and goes on a quest to find Maui.

Visually, the movie looks fantastic.  However, the story seems a little familiar.  There are several songs that are instantly forgettable.  The movie does not excel as entertainment, but it is enjoyable enough.  Some of the action sequences are quite exciting.

It makes a good rental.