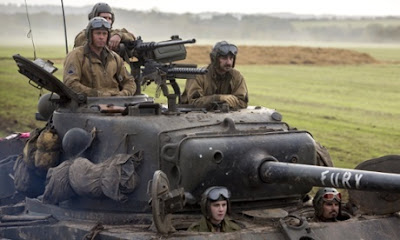 Tank veteran Bill Batts thinks that the movie Fury is very authentic, but can't show the full horror of war.  Really?  Fury is about the most horrific war movie I have ever seen.  The war violence is intense.  The last quarter of the film is one very long battle.  Watching the film is a deeply visceral experience.  Maybe this is why many critics didn't praise the film; some have criticized it for glorifying war and violence.

Fury follows a five-man tank crew as the Allies made the final push into Germany.  The tank is commanded by a battled hardened staff sergeant, Don "Wardaddy" Collier, played brilliantly by Brad Pitt.  Much of the movie centers around the relationship between Wardaddy and a very green new recruit, Norman, who isn't quite ready yet to face the horrors of war.

It seems to me that the movie has a political agenda where it portrays American soldiers in an unfavorable light.  Few in this film have any regard for morality, even as they quote scripture and talk about salvation.  In two scenes, soldiers execute an unarmed prisoner.  Maybe one of the prisoners had it coming.  The other soldiers regard these murders as amusing.  They also take sadistic delight in seeing the enemy burn alive.  In another scene, Wardaddy and Norman break into an apartment where two young German ladies are living.  Wardaddy gives the girls some food and they share a meal together, but there is an obvious tension in the room:  There is the implied expectation that one of the girls will have to have sex, willing or not.  The younger of the two ladies falls for Norman and they walk off to the bedroom together.  Everything is casual and amicable until the rest of the tank crew barge in.  The remaining crew are boorish, frighten the ladies and ruin the most peaceful moment of the movie.  Some critics called this the best part of the movie, perhaps because they also have a negative impression of American soldiers, but this particular moment in the film I found grating.

This negative portrayal of American soldiers I don't think is realistic.  There may be a few bad apples, but American soldiers are well disciplined and professional.  Most have a strong sense of morality, if not compassion.

On my second viewing of Fury, everything made sense.  The bad behavior seems insignificant against the backdrop of mass human slaughter that the movie presents to us.  I felt like I was watching history, accurate or not.  At the very least the movie is an interesting history lesson about tank warfare.

Brad Pitt's performance as Wardaddy, as I said, is brilliant, but also very macho.  I think that this is why some people weren't happy with the film.

In the 1940's war movie Sahara, a tank crew decides to make a stand against impossible odds.  The same thing happens in Fury.  I don't think that the crew would have made this decision knowing that they certainly would be killed.  As Tank veteran Bill Batts points out, it is unrealistic to think that they could hold out against a Battalion of  Waffen SS troops.  However, it made for a great final act.

In the final shot of Cool Hand Luke, an aerial view of a cross-shaped intersection is shown as a way of letting the audience know that someone died.  The final shot of Fury copies this technique.

Did I mention that watching the movie is a deeply visceral experience?  The young green recruit, Norman, is so affected by the horrors of war that he becomes a very different person in just a couple of days.  The audience feels this change and identifies with it.

If you can get past the unpleasant subject matter, this is a very brilliant movie.  Fury has a 77% rating on Rotten Tomatoes.
Posted by John Coffey at 10:34 PM