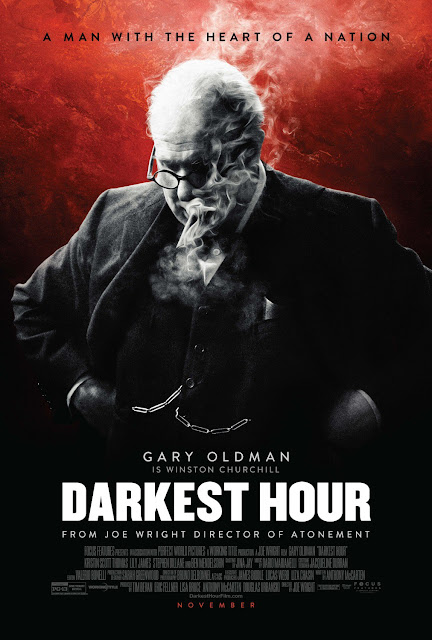 If you knew nothing about Winston Churchill, hadn't listened to his speeches, and hadn't watched other shows and documentaries about him, then you might conclude that Darkest Hour is a great inspirational movie about the man.  The problem is that it is not historically accurate, but instead revisionist, portraying Churchill as an indecisive, slightly befuddled old man, who only made up his mind to continue to fight against the Nazis, and not surrender, after an inspirational, but completely fictional ride in the subway.  This distortion of history I think is inexcusable.

The one thing that defined Churchill was his decisiveness and his resolve.

Gary Oldman in his layers of makeup is not totally convincing to me as Churchill. 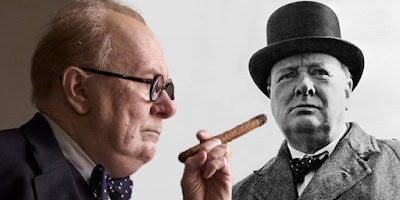 However, Oldman's performance is strong enough to make you feel like you are watching the real thing.

The movie gets some mileage out of Churchill's speeches, but only three of them, and the ones in the movie are greatly abbreviated.  Had they given the full speeches, it might have bored some people, but it would have given the audience more of a historical context, and felt more like you were there witnessing these things for the first time.  The movie finishes with his "Never Surrender" speech, which in the film is delivered like an inspirational call to battle, like a Saint Crispin's day speech.  However, if you listen to Churchill's actual delivery, it is much more somber.  Another problem with the way the movie portrayed this speech is that it shows it being broadcast on the radio at the same time that it was being delivered to Parliament.  Actually, Churchill gave the speech on the radio to the British people the day after he delivered it to Parliament.

Since the movie only covers a 30 day period, from May 1940 to June 1940, which was probably one of the most critical months in England's history, I feel that there was so much more that they could have given us about Churchill and the remainder of the war.  There are other shows and documentaries that have been far more informative, such as Into The Storm.  Even Netflix's The Crown has some interesting things to say about Churchill.

It is not a complete trainwreck of a movie.  The story of Churchill is inspiring in any context, and Oldman's performance is noteworthy and might even win an Oscar.  Much of the movie centers on how Churchill's own cabinet and even the King opposed him, thus giving us a story worth watching.

The film ties in well with the movie Dunkirk, which is far better since the events of both films take place during the same period.

Darkest Hour has an 85% rating on Rotten Tomatoes.