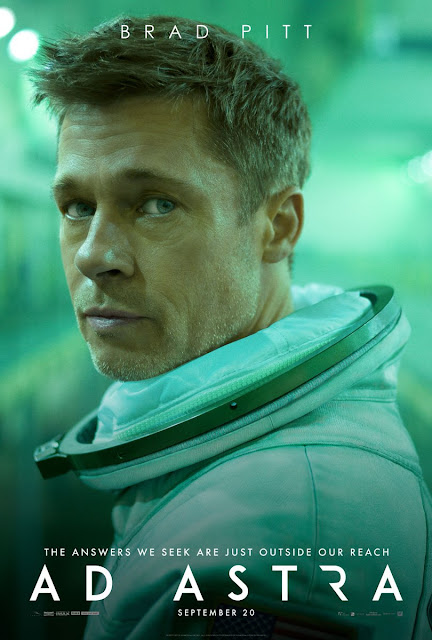 Ad Astra is a science fiction movie that works as entertainment.  It is about a man on a personal journey to find himself, and to find his long-missing father who might be endangering planet Earth.  The story is part 2001: A Space Odyssey, part Interstellar, part Gravity, part First Man, and part Apocalypse Now, all of which are better movies.  There is even one scene that reminded me of The Martain.  As such, the movie feels very much recycled, but it is also just original enough to be different, and the drama is good enough to make us care.

There are a few plot elements that don't make logical sense and these are a big problem.  The movie goes off the rails midway through, where the main character does something not believable, and as a result he gets people killed.  These deaths are more of plot contrivance to show the main character alone, and they are ignored for the rest of the movie.

There is much world-building that could have taken place, but instead the world these people live in is entirely left to our imagination.

Ad Astra has been described as the most realistic space movie ever.  I disagree.  That distinction really belongs to 2001: A Space Odyssey.  When it comes to the laws of physics, there are times when Ad Astra just doesn't care.  For a science fiction movie, it is pretty shaky on the science.  It seems to ignore what we know about orbital mechanics.  The film also portrays communication across billion miles as nearly instantaneous, when it takes hours for the round trip communication.  There is a scene late in the movie where Newton's Third Law of Motion is mostly ignored.  (I should also point out that nuclear explosions in space don't have shock waves.)

Brad Pitt's performance is really good, and if it wasn't for this the movie might have bombed.  Most of the other actors are pretty forgettable, except for Tommy Lee Jones whose brief appearance is also really good.

So the film seems to care more about the personal story and less about whether it is logical or makes sense.  This can work, but I find myself asking, "Is this the best they can do?"  The film's original budget was 80 million dollars, but test audiences didn't like it, so they did $20 million in reshoots.  Given that they spent that much money, couldn't the story and the science make more sense?

I think that there are many people in Hollywood who are right-brain thinkers, which is great for creativity and artistry, but not particularly great for logic.  As a result, we get a science fiction movie that is more about emotion than it is about science.

Ad Astra has an 83% rating on Rotten Tomatoes.

Brad Pitt is charming in any role.  If you want to see much better Brad Pitt movies, watch Once Upon a Time in Hollywood and Fury