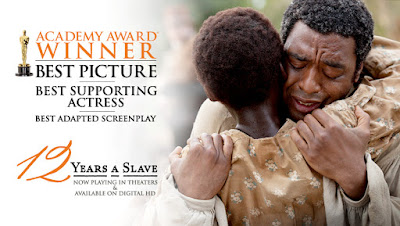 Solomon Northup was a free black man living in New York.  In 1841 he was kidnapped and taken to Louisiana and forced to be a slave for 12 years under the most cruel conditions.  After obtaining his freedom, he wrote a memoir Twelve Years a Slave and became an abolitionist and public speaker against slavery.

Watching the film 12 Years a Slave is a difficult experience to get through.  There is such cruelty depicted in this film that it makes Roots look like a Disney picture.  Not only is Solomon repeatedly beaten, but the movie also focuses on the character Patsey, who was a real person and suffered horribly under slavery.  In the movie, Patsey is played by the actress Lupita Nyong'o, who also played Maz Kanata in Star Wars: The Force Awakens,.  She won the Academy Award for Best Supporting Actress for her role as Patsey.

One has to wonder about the historical accuracy of the film, but from what I can read the film is mostly accurate, except that the cruelty in the film seems to be less than what was told in the book.


The film is an important history lesson, but it is hard to classify it as "entertainment."   Is the story entertaining?  Very much so, but for some it would too difficult to watch.