How to Train Your Dragon I & II 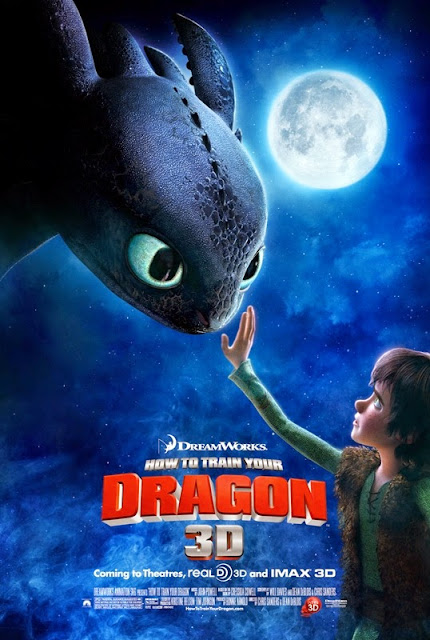 How to Train Your Dragon starts with the character Hiccup saying that the island Viking village Berk is great place to live except for the "pests".  The pests that he is referring to are the dragons that his Viking clan are at war with.  Hiccup is the meek teenage son of the leader Stoick the Vast.  Stoick wants his son to become a mighty Viking warrior to fight the dragons, but Hiccup is more of an intellectual.  Stoick doesn't understand his son and is quite frustrated with him, and Hiccup is also very frustrated because his father doesn't appreciate who he is.  At the insistence of his father, Hiccup manages to shoot a dangerous type of dragon called a Night Fury, but not kill it.  Hiccup ventures out into the wilderness to find the dragon and finish it off, but when he comes across the injured animal he instead feels sympathy for it and nurses it back to health.  Hiccup and the dragon that he now calls "Toothless" form a bond, but together they must stop the escalating war between the Vikings and the dragons.  By the end Hiccup is able to broker a peace between the Viking village and the dragons and the two groups form a symbiotic relationship.  He concludes the movie by saying that best thing about the village Berk are their "pets", i.e. the dragons.

How to Train Your Dragon II takes place 5 years later.  Stoick wants his now adult son Hiccup to become the new village chief, but Hiccup doesn't feel that he is ready and also feels that he hasn't quite figured out who he is yet.  Hiccup has occupied his time by exploring lands beyond the village where he comes across a powerful and dangerous group of people who want to capture all the dragons and subjugate them for war.  He discovers a mysterious person who is trying to protect the dragons, who also turns out to be his long lost and presumed dead mother.  Hiccup, being the peacemaker, tries to negotiate a peace with the belicose clan.  When that fails, the situation becomes a battle of good versus evil and Hiccup has to rise to the challenge to protect both his people and the dragons.


Both movies are very good.  I was afraid that the second film would be a complete retread of the first, but instead it follows a different and darker direction.  Together the two films deal with moral ambiguities in an intelligent way that might normally be too subtle for animated movies.

I am not sure that the dollar theater that I saw the second film at quite does it justice.  The projected film image didn't seem as a sharp as it could be and I don't think that it is a problem with the movie but a problem with the theater.  I have noticed this kind of problem before at this same theater.

I think that the second film is slightly weaker than the first, but not by much.  It comes out on DVD today.