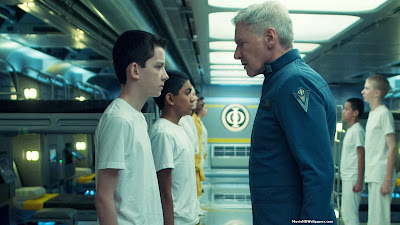 Ender's Game is a military science fiction movie based upon a wonderful novella of the same name.  Sometime in the future, the human race is attacked by an alien race called the Formics and the humans barely repel the attack.  In a desperate attempt to prevent another attack, the humans plan to take the battle to the Formic home world.   In the hope of developing new, brilliant leadership, the military begins training a few talented children chosen for space combat.  They go through a series of training simulations, i.e. "games" to prepare them for war.  Ender Wiggin is a particularly brilliant cadet who is taken under the wing of the fanatical Colonel Highland Graf, played by Harrison Ford.  I like Harrison Ford's portrayal of Graf as a man who has only one purpose in life:  Destroy the enemy.

Watching Ender's Game is a deeply visceral experience.  I had my doubts about whether this novella could be adapted to the big screen, but the movie felt intense to me.  I am wondering if the movie will have the same effect on a smaller screen, i.e. Home video?  Maybe one of the reasons the movie felt so intense to me is that I knew what the surprise ending was from having read the book.  The movie and the book raise a few moral questions about the possible genocide of an alien race.

I highly enjoyed Ender's Game and felt that it was loyal to the book, which, by the way, is one of the best books I ever read.  The book has spawned many sequels, so maybe we will see more of Ender Wiggin on the big screen.

Some of the events in the book are abbreviated or omitted in the movie, including not telling us that Ender unintentionally kills one of the other cadets.

It took me at least an hour after I saw the movie to realize that Ender's sister is played by Abigail Breslin.  It bugs me that I missed this at first.  The pretty little girl from  The Ultimate Gift, Zombie Land, and Little Miss Sunshine has grown into a pretty teenager.
Posted by John Coffey at 10:07 PM