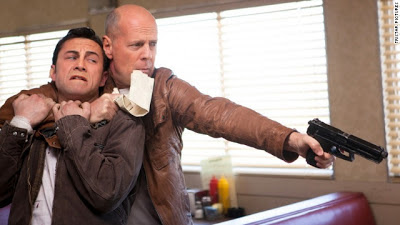 One problem with watching any movie is that you have to wonder if it is worth 2 hours of your time?   A movie that is too grim leaves me feeling down and not very entertained.   Fortunately, Looper ends on such a  positive note that all its dystopian death and destruction becomes tolerable.  The fact that the time travel plot so thoroughly messes with your mind is a good thing, although I suspect that some people might not like it.  Throw in some great action sequences and you end up with a pretty decent movie that is still maybe not perfect.
Posted by John Coffey at 9:32 PM