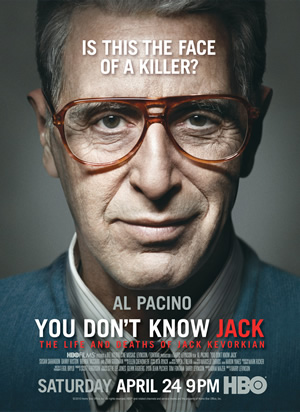 "You Don't Know Jack" is the HBO movie about Jack Kevorkian, which is interesting and thought provoking.  It stars Al Pacino, who gives a great performance as always, Susan Sarandon and John Goodman.  About half way there is a 2.5 minute argument between Jack and his sister that is about 2 minutes too long.  It is boring and repetitious.  Other than that, it is an interesting movie.

Kevorkian would film and interview the people he helped die.  The movie makes use of actual film footage to show that people really were suffering.  I found this touching and it gave the movie more realism.

It should be noted that Kevorkian's friend and advocate, Janet Good (played by Sarandon), who he also helped to die, may not have had pancreatic cancer after all.
Posted by John Coffey at 12:56 AM