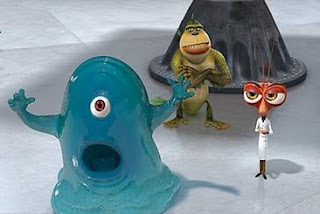 Monsters versus Aliens divides its time equally between intense action sequences, and a combination of personal story with a mile-a-minute pop culture movie references.  Normally this kind of humor would fall flat, but here it doesn't, mainly because the fast pace of the movie forces us to pay attention or else we will miss out on the jokes.  (Like a mutant scientist building an atomic bomb out of Legos.  Like the general named "W. R. Monger."  Like a room so secret that you have to scan 6 body parts to get in.  I will let you guess what the 6th body part is.)   There is a parody of just about everything in this movie, but the downside is that you need to be familiar with science fiction to get some of the jokes.

For example, consider this scene:  Two scientists are monitoring the skies for UFO's.  One of them looks like he is playing a 2600 video game.  When a UFO shows up on their radar, they start to panic.  One of them calls it in.  "Supernova, this is Red Dwarf.   Code Nimoy!  Code Nimoy!"

There is also some horror movie parody.  Consider this scene:  Two teenagers are parked on lover's lane in a convertible.  He's a school athlete whose bumper sticker says "gym nasty", but he is too nervous to even get to first base with his girlfriend.  Something comes up behind them, and he thinks it is the cops.  It is not.  This is typical monster movie fair where something horrible is about jump out of the bushes, except that in this case it is not a monster.  It is something a little more interesting and the funny twist is that the girl ends up rescuing the guy.

Whoever made this movie had a great attention for detail, because there is a lot of detail in this movie, along with some over-the-top hardware.  The important point is that the combination of action and intense detail kept my attention completely in same way that "Speed" captured my attention and never let it go.

But I feel that this movie has been slighted by the critics who put the film at about two and a half stars.  Where should it be rated?  For someone who understands the in-jokes, it is about 3.5 stars.  Otherwise, it will come across as a slightly silly action comedy, worth about 3 stars.

*** Since I first wrote this, I have seen this movie three more times and enjoyed it thoroughly each time.  I am not afraid to say that this silly action comedy should be rated 4 stars.  It has to be the most under-appreciated movie in recent memory.
Posted by John Coffey at 1:15 AM