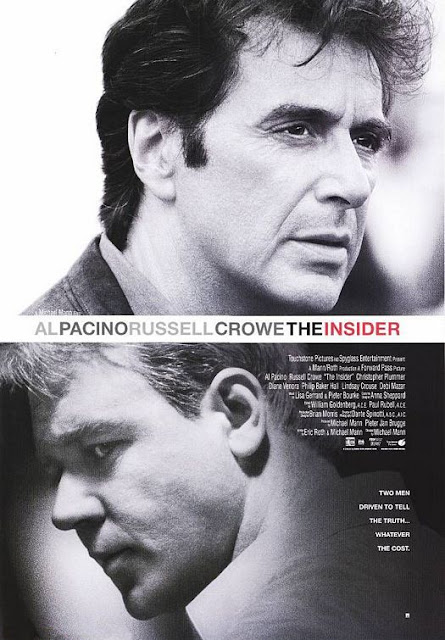 It seems to me that the movie plays a bit like a history lesson, although an interesting one, especially by the way it is played by the two principle actors.  This is a side of Russell Crowe that we have not seen before, although I think that there is a slight similarity to his A Beautiful Mind performance.
It bothers me that the movie plays a little loose with the facts for dramatic effect.  They made up a scene where Jeffrey S. Wigand finds a bullet with a note on it.  Would that not be slander toward the tobacco industry?
I have to wonder about the significance of the events portrayed in this movie.  The movie does a great job of making what might otherwise seem rather mundane interesting.   But how many people in the 1990's didn't know that tobacco was dangerous and addicting?   So I don't see the 60 Minutes piece as being that revealing.  The $268 billion dollar settlement happened because the states sued the tobacco industry, which makes me wonder how culpable the tobacco industry should be for providing a product that many people want and everybody knows is dangerous?    Should the states also sue McDonald's for serving fried food?
Posted by John Coffey at 1:34 AM