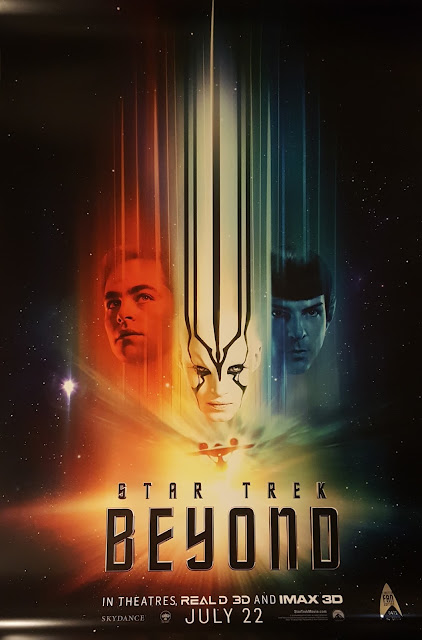 Oh, Indiana. I forgot how hot, humid and miserable your summers could be. What a great time to go see an air conditioned blockbuster summer movie.

The Starship Enterprise is half way through its five year mission, and some of the crew is feeling the strain of a long term deep space mission.  Kirk is considering taking another post, and Spock feels that maybe his time would be better spent helping to restart the new Vulcan home world.  The Enterprise docks at the Starbase Yorktown for resupply, when an escape pod emerges from a nearby nebula.  The occupant claims that her shipmates are stranded on an uncharted planet in the nebula.  The Enterprise goes into the nebula on a rescue mission, but encounters an overwhelming hostile enemy.  Most of the crew end up imprisoned on the uncharted planet, with the exception of Kirk, Spock, McCoy, Scotty and Chekov who attempt to free their fellow crew.

My one complaint about the Star Trek reboot films is that they feel too busy.  This movie may not be as bad as its predecessors, but it still feels rushed.  There is some character development, but only briefly between action sequences.  It feels like a lost opportunity to explore the characters more.  The movie needed to catch its breath so that the audience could do so as well.  I get the sense that the producers think that we already know who these characters are, so there is little need to explore them.

For example, it is implied that the character of Jaylah is an engineer, but I don't think that it is explicitly stated, nor is very clear to me who she is or how she ended up on the uncharted planet.  Therefor her character feels like a plot device.  It is also not clear why the Enterprise crew was being imprisoned on the planet.

The Yorktown starbase is like an Escher Painting with its complex surfaces going in every conceivable direction.  It is not only confusing to the mind, but I can't imagine watching this is 3D.  It might give a person motion sickness.

The movie pays tribute to the late Leonard Nimoy in two ways.  First we are told of the passing of the older Spock from the alternate timeline future.  Then the credits have the statement, "In loving memory of Leonard Nimoy."  I was hoping to also see a tribute to Anton Yelchin, but maybe Yelchin's death came too late to be mentioned in the movie.  Unfortunately, his character, Pavel Chekov, doesn't get much screen time.  It has been announced that the character will not be recast for future films.  In a way that is unfortunate, because Pavel Chekov is an important character in the Star Trek universe.

Just when I have come to accept these actors as the Star Trek characters that we love, the movie ruins the illusion by showing us a picture of all the original actors from Star Trek V.  This ruins the illusion because we know that the new actors look nothing like the old actors, and never will.

I like the movie, and it is a marvelous technical achievement.  However, it is not clear to me that there is enough in the film to make me want to see it a second time, but since I am a big Star Trek fan, I will probably see it a second time anyway.

Star Trek Beyond has a 84% rating on Rotten Tomatoes.
Posted by John Coffey at 1:24 PM