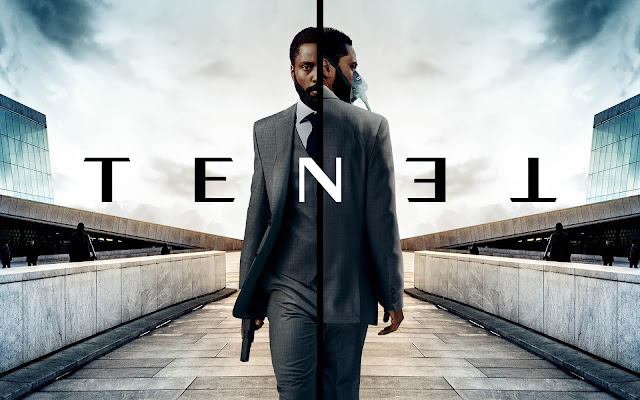 Tenet would have likely been one of the biggest blockbuster hits of last year as a science fiction action thriller film written and directed by Christopher Nolan.  However, on the surface, it feels like the wackiest James Bond movie ever made.  The main character, called only "The Protagonist", is a spy sent to track down secrets to ultimately stop the end of the world.  It seems as if everyone else in the movie already knows the answers to these secrets except The Protoganist who has to figure them out one piece at a time.  His journey mirrors the audience who are also learning about these secrets for the first time.

The premise is that in the distant future someone builds a machine that can "reverse the flow of entropy" on matter and people, which means that the matter and people experience time in reverse.  The reversed matter travels backward in time at a normal rate instead of forward at a normal rate.  I am pretty sure that this is and will forever be physically impossible, but science fiction is full of impossible contrivances.  In this sense, the premise is similar to the low-budget mind-bending time-travel film Primer.

The future people are unhappy about Climate Change ruining their world, so they devise a plot to destroy the world in our time thinking that they can still protect themselves in the future, which absolutely makes no sense.  They devise a way to communicate with a dying psychopathic billionaire who agrees to go along with their scheme.  The billionaire and the future people send information and technology back and forth by burying it in designated spots for the other to retrieve in their time.

This leads to some very convoluted scenes of people fighting and scheming against each other while experiencing time in opposite directions.  This includes a great battle that is too confusing for normal minds to follow.

There is an obligatory romantic interest that causes The Protagonist to do things that otherwise might be counter to his mission.

I am pretty sure that the movie as a whole doesn't make sense, but it doesn't matter.  There are likely people who will analyze every scene and plot it on a graph so as to finally understand the entire story, as was done with the very convoluted aforementioned film Primer.  Except that I am not so enthralled with the movie's excesses that I would do that.  I don't care if the movie makes sense or not.  This film is what I like to call, "A Grand Spectacle", and as such, it is a visual treat to watch whether it makes sense or not.  I don't have to fully understand it to enjoy it.

Despite the absurdity of the whole premise and the overall complexity of the story, the movie is a captivating experience.

Had the film been a major blockbuster last year, instead of experiencing a limited release in theaters due to COVID, I'm sure that people would have talked about it for months.  This is the kind of movie that people make videos on Youtube to explain.