The Help (Rating: B) 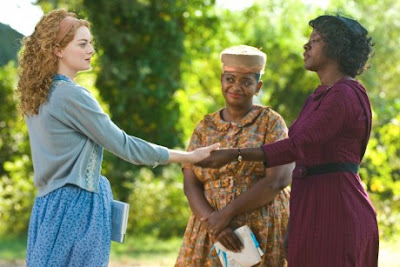 The Help is a new movie about racial bigotry in Jackson Mississippi around the beginning of the civil rights movement..  It is also about the friendship between a young white author and several black maids, and her determination to publish a book about their experiences.

There is an unbelievable scene in the middle of that is disgusting, but funny.  I sometimes have a low tolerance for things like this, which is why I never watched American Pie, because I know what the title really means.  I will eventually get around to watching it.  Likewise, in the movie Crash, which is another movie about racism, there is an unpleasant sexual assault by a police officer that soured me on the whole movie.  I wondered if such a scene was realistic, or if movie was forcing a distorted view to fit an agenda.

The movie The Help and the book by the same have been the subject of much controversy.  They have been criticized for not being historically accurate, whitewashing the true history, and for the way it portrays white and black characters.  It has also been praised for its great performances and willingness to address racial issues.  Since one of the things the movie is about is the publication of a 1963 documentary book called "The Help", the film gives us the false impression that the movie is completely based upon real events.  Actually the book is fictional and published in 2009.

Accurate or not, the movie knows how to tell a great story.  It hits all the right buttons and works from beginning to end.  The cast and the acting are great.
Posted by John Coffey at 1:44 PM