Children of Men. Rating: A 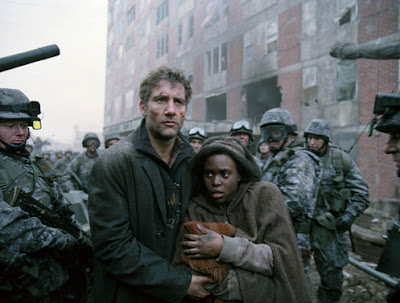 In a bleak chaotic future in which humans can no longer procreate, a government civil servant, Theo, agrees to help transport a miraculously pregnant woman to sanctuary.  Initially she is traveling with a violent rebel group that wants to use the baby to promote their cause.  This group has no qualms about killing anyone who might get in their way, and eventually the group starts an armed rebellion against the British government.
Initially the film presents us with a dystopian future which is depressing to look at.  This might serve as a warning of things to come.  We can only hope that the future is better than what is depicted in this movie.  However, when the bullets start to fly and the main characters try to escape a war zone, the movie turns intensely violent in a brilliantly executed extended action sequence.


Michael Caine has a strong supporting role as an old hippie, which is counter to his usual roles, but completely believable.


The movie does a great job of exploring post 9-11 themes, as well as religious themes.  The pregnant woman is essentially the mother of the entire future human race.


I had to turn on closed captioning to understand some of the British accents.  The movie never slows down to explain anything, but assumes that you are smart enough to follow along.  I paused the film in places to read some of the billboards, many of which give interesting insights into this future world.


The movie is rated R for violence, language, and brief nudity.
Posted by John Coffey at 2:03 AM