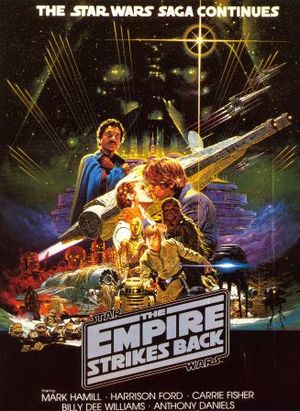 Having seen this movie several times, I was concerned that I might not enjoy another viewing.  I needn't have worried.  This is a really great film.  It retains everything that was great about the first Star Wars movie while doing several things better:

2.)  Acting.  If you look at all the different mannerisms of Han Solo, I defy anyone to find a better Harrison Ford performance.  Carrie Fischer also does great work here.  Mark Hamill shines more toward the end of the movie, but I don't think that he was given as much to work with.  I think that he does his best work in the third movie.  Finally, David Prowse should be given some credit for his intimidating presence as Darth Vader.

3.)  Sets.  Every room in the cloud city is like a different work of art. The other sets, for example on Hoth and on the star destroyer, are good too.  This movie is a feast for the eyes.

4.)   Special effects.  31 years later, most of the special effects hold up really well.  There are some scenes that are just breathtaking.

5.)  Ideas.  Most writers would have been proud to come up with one really great idea.  This movie has several.  These include the ice planet, the walkers, Yoda, the city in the clouds, Luke having an imaginary battle with Darth Vader,  Yoda's grammar and witticisms, the asteroid field, the space monster, and finally Darth Vader's revelation to Luke.

6.)  Pacing.  Rather than start slow and end with all action, The Empire Strikes Back mixes the action with story and character development to produce what may be a perfect movie.  The only time I was a little bored is during the early scenes with Luke on Degobah.  These scenes seem to drag out a little long before switching back to the story of the pursuit of Millennium Falcon .

The 1997 re-release of the movie introduced a few new special effects, mostly when the Millennium Falcon flies into the Cloud City, it does a flyover of the city.  This makes the city appear larger than it did in the original release.  I don't think that this meshes well with the original special effects because it looks too "real."  The original special effects are all stop motion capture, and although they look very good, sometimes you can tell that they are stop motion capture.  The added scene is all computer generated and looks more like what you would find in the second trilogy.  I found myself wondering why do we need this?

The 2004 DVD release also changed the scene between Darth Vader and Emperor Palpatine to have Palpatine played by Ian McDiarmid.  The original shot of the Emperor was actually played by an uncredited woman in heavy makeup.  Since the original scene was fine, I once again wonder why we need the change?
Posted by John Coffey at 5:16 PM