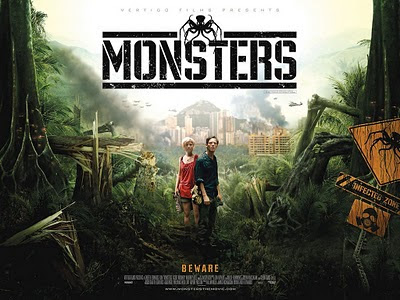 Spoilers below ...
From: Robert
I watched it last evening.  I liked it a lot.   It’s very suspenseful.  I like when they don’t show the monster because that builds the anticipation.  I wasn’t planning on finishing it all in one evening.  But I did anyways because I had to see how it ended.
I didn’t like what I learned about the opening scene though.  In the commentary they make it clear that the opening scene is actually the very end of the movie.  I wanted a happy ending where the girl and the guy make it home and they live happily ever after.  They don’t dwell on it too much and it’s not that obvious.
From: Robert
So now that you have seen the movie I can tell you what I didn’t like about the story.
In the commentary, at the very beginning, the director makes a comment saying, “and there is a dead Samantha being dragged away by Andrew”.   So the possibility that she actually dies before she is rescued was something I didn’t like.  But the movie doesn’t make it obvious so I think it can be debated whether she dies or not.  I prefer to believe she made it home and she gets married to Andrew instead of her fiancé.  In real life she does get married to her co-actor playing Andrew.   It’s like the ending of “The Mist” where everyone dies, I was hoping for a friendlier happy ending.
The director says the monsters are a cross between crabs and squid from an ocean below the ice environment from one of Jupiter’s moons.  They don’t bother you unless you provoke them.  But I thought it was a bit unrealistic to have them take down an F-15 or helicopters from what we are shown they can do.
From: Coffey, John R
Bob,
I might not have made the connection between the opening and the ending were it not for reading what you said.   I had to go back and watch the beginning in slow motion to understand what was going on.     I felt that it was left open to interpretation but I assumed that that girl was dead.    I like this because it says that you can be alive one minute and dead the next.
Like you, I also wanted a happy ending.
The fact that they couldn’t stop the monsters is not realistic given that you could have a scorched earth policy like in “Cloverfield” or "The Crazies".    But I like the themes of fighting a war that you can’t win – and the parallel to illegal immigration  - and not being able to fight nature.   I don’t necessarily agree with the messages they present, but I think that the themes are entertaining.
On my blog I gave it * * * .5.  What would you give it?
Best wishes,
John Coffey
From:  Robert
3.5 at least but probably not a 4.0
Posted by John Coffey at 6:54 PM