The Vast of the Night 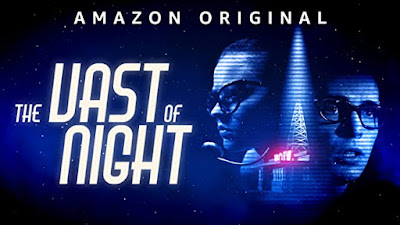 The Vast of the Night was released to drive-in theaters and on Amazon Prime in May of 2020.

When I was reviewing the movie "The Signal", I said that the trouble with low budget science fiction movies is that these types of films might have one good idea, whereas a big-budget movie like "Star Wars: The Empire Strikes Back" is loaded with many good ideas. The Signal kept you in suspense for the whole film, making you think that this story was leading up to something wonderful. There was a payoff in the end, but that payoff was so short that if you had closed your eyes for just a couple of seconds then you would have missed it. Literally. Everything I said about "The Signal" is also true for "The Vast of the Night", except the ending is a little longer. However, both movies are an exercise in prolonged tension to arrive at similar endings. The Vast of the Night feels like a master class in low budget filmmaking. It does a great job with its long camera shots and its unknown actors who give stellar performances. The movie starts by showing an old fashioned television screen like it is playing an episode of the old Twilight Zone. The camera zooms into the screen and now we are following characters in a 1950's small New Mexico town on the night of a high school basketball game. It spends a long 20 minutes introducing its settings and characters, after which the local switchboard operator starts noticing weird things happening. She teams up with her friend, a disk jockey at a one-man radio station to investigate what is going on. Many of the scenes drag on a bit, mostly with conversation. But there is a frantic tension that builds toward the conclusion. Fortunately, the actors really sell this story. We get a sense that these are ordinary people caught up in something big that they don't understand. The minimalist style of this film could be called experimental, but for 85 minutes it works really well. Rating: B+. A reviewer on youtube gave the film an A-. https://www.youtube.com/watch?v=_HEcnacyI_8