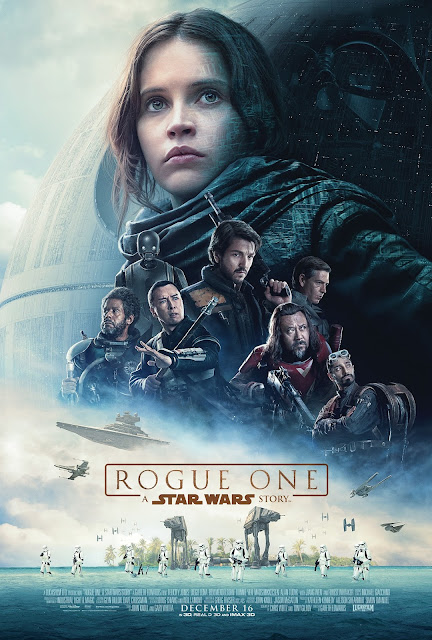 When Jyn Erso is a young child, her father is taken prisoner by the Galactic Empire and forced to do research on a new weapon, the Death Star.  She is raised by a rebel extremist Saw Gerrera, but eventually finds herself imprisoned by the Empire and headed to a forced labor camp.  She is rescued by the rebellion, who want to use her to get to her father.  Her father has smuggled a message to the rebellion, saying that there is a weakness in the Death Star, and if they could find a way steal the plans, then they could destroy it.

Whereas the previous Star Wars films were ensemble pictures with many great characters, I feel like the only great character in this film is the protagonist Jyn Erso.  There are a handful of other characters that are interesting at different levels, such as Rebel Alliance Intelligence officer Cassian Andor, who becomes a love interest for Jyn, weapons researcher Orson Krennic, blind rebel warrior Chirrut Îmwe, and rebel-owned Imperial enforcer droid K-2SO, who also provides some comic relief.  Because there is much going on in this movie, most of the secondary characters don't get a lot of screen time, so we don't get to know them as well as we would like.

Various characters from the original movies make appearances here, most notably Grand Moff Tarkin, Darth Vader, Mon Montha, R2D2 and 3CPO, and briefly Princes Leia.  Grand Moff Tarkin and Princess Leia are played by Guy Henry and Ingvild Deila respectively, who look nothing like Peter Cushing and a young Carrie Fisher, so some special effects magic is used to make them appear like the original actors.  In the case of Grand Moff Tarkin, I kept thinking that he didn't look exactly like Peter Cushing, but it was close enough to be convincing.  However, the brief appearance of Princes Leia is slightly unsettling thus spoiling the effect.  Although the character does look like a young Carrie Fisher, the face is a little too round and lacking the sharp lines we would expect.  Nevertheless, the appearance of Princes Leia does give the film some extra emotional impact.

Darth Vader's appearance in the middle of the film isn't particularly meaningful, and the voice by the 85 year old Jame Earl Jones doesn't have quite the same impact it once did.  There is a subplot here about Orson Krennic having a power struggle with Grand Moff Tarkin, but this seems more like a distraction.  However, this is made up by Vader's later appearance where he is for a moment completely badass.

Rogue One compared to The Force Awakens is slightly stronger on plot, but a little weaker on characters.  Rogue One has more characters, but consequently each character gets less attention. Neither movie feels like a perfect Star Wars film, but both are good enough.

Did we really need this movie to fill in the story between Episode III and Episode IV?  No, but it does make for an entertaining diversion providing something that we have not seen before.