George Lucas on Why Carrie Fisher Was Special

Top 10 Actors You Know By Face But Not by Name

George Lucas on Why There’s No Racism in Star Wars

Interesting discussion. George Lucas points out that fans hated C-P3O in the first movie, Ewoks in the second movie, and Jar-jar Binks in the 4th movie. As for me, I had few qualms about C-P3O except that I am not a fan of the "Barney Fife" line of characters. When you have to provide comic relief using a bumbling, incompetent character, I cringe. This might be due to my military background.  There's no room for comic relief unless your willing to let let people die for a laugh. Imagine if your surgeon used Barney Fife as a comic relief role model while conducting surgeries. Now, it's not so funny, especially if your the patient.
I agree with Lucas about the Ewoks. I hated them. They felt out of place. It seemed too far fetched to have 2 foot teddy bears defeating the most technologically advanced military force ever assembled in the universe. Of course, the Star Wars universe was no longer catering to their original fan base, but rather their new up and coming fan base.
Jar-jar Binks was the worst of all. I have no need for a bumbling, animated "Jamaican" alien. Especially one who looks like Bugs Bunny had taken a direct hit at ground zero, melted, morphed and mutated into a Jamaican alien. I remember thinking what could be a worse character than Ewoks. Jar-jar. WTF George Lucas? Lol
https://youtu.be/39HBTxQAMdQ

The Ewoks came about because of a lack of funding.  George Lucas wanted to do a planet full of Wookies, which he was able to pull off in Episode III: Revenge of the Sith.  I would have thought that Lucas would have had all the money in the world to make his third movie, but the way expensive movies get financed is complicated, involving multiple producers providing funding often through loans.
We got 11-year-old Warwick Davis playing the main Ewok, Wicket, and as a result, he went on to play other parts in Star Wars and other movies like Willow and Harry Potter.
It was always Lucas' intent to have the Empire defeated by a bunch of "primitive" people.  There is a little bit of an anti-technology theme in Star Wars, like when Luke turned off his targeting computer.
I wasn't thrilled about the Ewoks, but the only thing that really bothered me was their singing at the end of the original movie, which felt super cheesy to me.  Fortunately, they took this out later but added an even worse musical number in Jabba's Palace earlier in the film.
I don't feel like we should be bothered by accents in Star Wars films, because the placement of accents was deliberate by Lucas to make alien characters feel different from other characters.   The character Watto the junk dealer has his own accent, and some people have described him as a Jewish stereotype.  I'm not sure that he is.
A friend of mine complained about the series Rome because everyone spoke in an English accent instead of anything that remotely resembled Italian, but I pointed out that had the series been made in Australia, almost everybody would be speaking with an Australian accent.
It made sense to me that not all the characters in a science fiction movie would be of equal intelligence nor follow the same behavioral norms.  The Gungans seem to be less intelligent and more warrior-like, but if you have a planet with two sapient species, they are not going to be the same.  Part of what makes Star Wars interesting is different species interacting with each other.
I feel that you need comic relief in an otherwise almost over-the-top serious movie such as The Phantom Menace.   I don't see the portrayal of Jar-Jar as outrageous, over-the-top, or insulting to the audience.  However, I do feel that way about the musical number in Jabba's Palace.
Best wishes,
John Coffey
Posted by John Coffey at 3:46 PM 0 comments 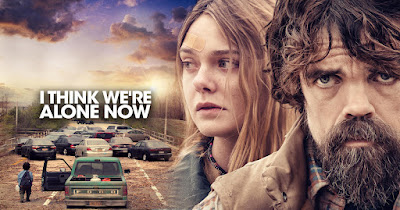 In a post-apocalyptic world, Del, played very well by Peter Dinklage, seems to be the last man alive.  He lives in a small town in New York state, and he has taken it upon himself to bury the 1600 other residents who are all dead.  He is content with his solitary life, but that life is turned upside down when Grace comes to town.  Whereas he is very reserved and introverted, she is the exact opposite.
The cause of the apocalypse is never explained because the characters have no idea what happened.  Del doesn't even care; he wants mostly to be left alone.
Later we are introduced to a questionable character, played by Paul Giamatti, who I really loved in the HBO series John Adams.
The words "slow burn" are popular now to describe some entertainment, especially science fiction, that moves at a slow pace.  We have certainly seen that in several series and movies.  The French TV series "Les Revenants" is extraordinarily good and very popular in Europe, but the story doesn't seem to go anywhere.  The Apple TV series "Invasion" is nothing but a slow burn and fails to deliver.  The Amazon series "Outer Range" is definitely a slow burn but keeps the viewer interested   The Disney+ series "Andor" turns slow burn into high art.  You see the same pattern in some movies, such as "The Vast of the Night", "Annihilation", and "Signal."
There is a reason for all this.  Good science fiction is extremely expensive to make.  Cheap science fiction typically has at most just one good idea.  In the beginning, they will introduce a mystery, keep the audience in suspense, and then reveal the one good idea at the end.  We see this pattern way too often.  The special effect at the end of the movie "Signal" is so brief that if you just happen to close your eyes for a couple of seconds then you will miss it along with the point of the entire movie.  This is what cheap science fiction looks like.
The main issue is whether a slow-burn series or movie can hold our attention long enough and end well enough to make us glad that we watched it?
I initially didn't think of "I Think We're Alone Now" as a science fiction film, but it is told in three parts which are quite different from each other.  The first part is about post-apocalyptic survival.  The second part is an awkward romance and the third part involves a twist that takes the film into "Outer Limits" territory, although I have seen better twists in better movies.
The movie has a 63% rating on Rotten Tomatoes.  Much of the criticism revolves around people not liking all three parts or feeling that it is disjointed or too slow.  The final twist might have been too much for some people.
However, the movie totally worked for me.  Even though the pace is slow, it progresses just fast enough to keep me interested.  It stretches the suspense out but keeps the story moving.  Also, Peter Dinklage is a good enough actor to turn the movie into a fascinating character study, otherwise, I think that the film would not work at all.  The payoff at the end isn't particularly great, but it is not bad either.
I am trying to figure out if there is a deeper meaning to the film, and I am not coming up with much.  It could be a study on dealing with grief and loneliness.  The ending could be a metaphor for "haves" versus "have-nots", but I am stretching here.  The film touches on other issues such as obsessive behavior, authoritarian control, and cults.
The movie is rated R perhaps for its post-apocalyptic subject matter, but I saw very little that people would find offensive.  A more appropriate rating would have been PG-13 for some swearing.
Rating: B. The movie is streaming on Hulu.
Posted by John Coffey at 1:41 AM 0 comments 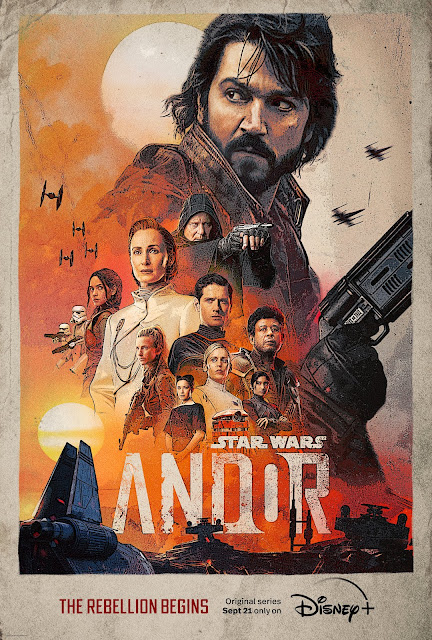 The Disney+ Star Wars series Andor is shockingly good. Just how good is it? It is on par with an average Star Wars movie. I liked "The Mandalorian" series even better, and I regard it higher than any of the Disney sequel trilogy movies.
For $8 you could get a month of Disney+, watch all 11 Star Wars movies, Andor, The Mandalorian, and the really excellent animated series such as The Clone Wars, Star Wars Rebels, The Bad Batch, and Star Star Wars Visions. In addition, you could watch 37 different Marvel movies starting with Iron Man, and some fairly good series such as Wandavision, Loki, and "The Falcon and The Winter Soldier"
Plus you get all the Disney and Pixar content.
Posted by John Coffey at 6:10 PM 0 comments