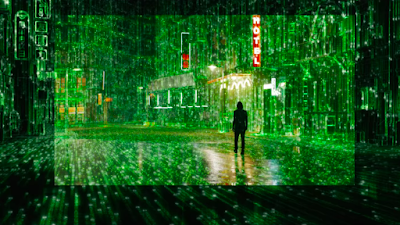 The Matrix Resurrections is not as innovative nor original as the first film.  Not even close, but it is passable entertainment.  Mostly.  The beginning is too slow, but once it gets going, the action is entertaining but repetitive with what we have already seen. Fortunately, the film throws around a few new ideas, which was just enough to make me glad that I saw it.

The initial part follows a resurrected Neo as the creator of the video game trilogy called "The Matrix". He is having breaks with "reality" where he thinks that The Matrix is something real that he has experienced before. The movie is so "self-aware" that it borders on self-parody.  Also, a seemingly compassionate psychiatrist, played brilliantly by Neil Patrick Harris, is trying to keep Neo suppressed, which is an overdone concept in movies and TV shows.  Total Recall comes to mind.

Then Neo is rescued, and the film starts to feel like a retread.  It is always echoing past scenes while giving us new wrinkles on the story.
We get new likable characters, but the movie falters by recasting Morpheus and Agent Smith.  Not having Laurence Fishburne and Hugo Weaving is a serious loss.  I went along with this change, but I looked at these new actors as if they were playing new characters.
It is difficult to accept the rules of the Matrix.  We are talking about a virtual reality world where people can't disconnect without dying.  They have to find an "exit".  They also die if they get killed in the matrix.  These rules make no sense logically, but the first film successfully sold these ideas by having the characters really believe it and by having a strong sense of style.  Therefore the matrix exists in a universe with its own rules.  However, the new movie does nothing to re-establish the rules and is also deficient in the style department.
It is also difficult to understand the motivations and the limitations of the matrix itself.  It resurrects Neo and Trinity, but it can't control events once they get started.  It is forced to play by its own rules, but you would think that a computer simulation could do almost anything.
That is because the movies aren't about a computer simulation.  They never were.  They are about rebelling against the power structure that is presumably keeping everyone suppressed.
I feel the same way about this film that I did about the 2001 version of The Planet of the Apes.  I was entertained, but the movie was so insubstantial that ten years later nobody remembered it.
Most people are going to look at this film as a failure compared to the original.  I feel that it deserves a "B" for entertainment value, but it is at best a half-hearted effort.  It is only slightly better than what a made-for-TV adaption would be.
Rating:  B-.

From 4 years ago : The Last Jedi

Things that DIDN'T HAPPEN or weren't expounded upon in Star Wars: The Last Jedi.
There were a ton of theories and supposed leaks about what was going to be in the movie. Here are a few.
1. Snoke was really Darth Plagueis, Jar Jar Binks, Leia Organa, or Donald Trump. Actually, the movie doesn't explain who Snoke is, although I have heard that the comics give some of his back story.
2. Luke tells Rey that she is his father. This would have been an ironic twist, but the supposed leak was that she is the reincarnation of Anakin Skywalker. The story went that "The Chosen One" reincarnates and Rey was the reincarnation.
I was hoping desperately that this would not be the case, because it would have been one of the corniest lines in all of Star Wars.
There were so many incorrect leaks from supposedly reliable sources, that I suspect that Lucasfilm might have been disseminating false information to throw off all the leakers. This one sounds like an April Fool's joke.
Some of the later trailers seemed to have been cut in a way to deliberately mislead about certain plot elements. However, many observant fans quickly figured this out.
3. Luke tells Rey that there is so much more to the Force than the Jedi way. This actually was in the first trailer, but I don't recall hearing it into the movie, just as The Force Awakens and Rogue One have scenes in their trailers that didn't make it into the movies. Often trailers are released before the final editing of the movies are completed.
This lead to the popular theory that Luke was a "Gray Jedi", which is to say both light and dark. The concept of a "Gray" has been explored in other Star Wars media.
4. Kylo Ren and the Knights of Ren visit Acho-To and do battle with Luke. He quickly dispatches the Knights of Ren with a new "push" force power, and then does battle with Kylo Ren.
There are people who claimed that they saw this scene being filmed. It is possible that the scene was filmed, but not used. (I am pretty sure that I saw a photo of Kylo Ren on the island.)
In the original films, there were several scenes that were filmed that were also not used.
The first cut of the movie was a whopping three hours long and had to be trimmed down to 2.5 hours, which still makes it the longest Star Wars movie.
5. Either Anakin Skywalker, or Darth Vader, or both, appear as a force ghost.
There were sources claiming that the actor Hayden Christensen was seen on the set of The Last Jedi. Likewise, Hayden Christensen came out of hiding to make public appearances where he claimed that Star Wars was still part of his life.
This could still happen in the next film.
6. As part of a test, Rey has to go underwater to fight a sea monster.
Again, people claimed that they saw this scene being filmed.
7. I'm not convinced that we know the truth yet about Rey's parents. Kylo Ren could have been lying, but on the other hand I thought Darth Vader was lying too.
In an interview, Adam Driver actually referred to Rey as a princess in hiding pretending to be a nobody. This confused a great many people, but some thought that this might be deliberate misinformation, and others thought that Adam Driver was speaking figuratively.
There was nothing in this film to indicate that this might be true. Still could happen, but it doesn't seem likely based upon what we have seen so far.
Daisy Ridley claimed that Rey's parents were obvious to her after filming The Force Awakens and thought that everybody would figure it out, but that doesn't appear to be so obvious from what we have seen in the movies.
The shuttle that leaves a young Rey behind on Jakku looks so much like Luke's shuttle that appears in some of the comics. There were many things that made people think that Luke was Rey's father, but in the movie he doesn't seem to know who she is.
There were very popular theories that Rey was the granddaughter of Obi-wan Kenobi or Emperor Palpatine.
8. Relo. The idea that Rey and Kylo would fall in love.
Posted by John Coffey at 7:34 PM 0 comments

Best movies that I'm going to recommend:
(In descending order.)

The Empire Strikes Back (almost everyone has seen this already.)
Brooklyn
Cloud Atlas
Rocketman
The Fault in Our Stars
The Right Stuff
1917
Interstellar
Children of Men
Son of Saul (might be very troubling to some)
American Sniper
The Impossible.
The Theory of Everything.
Frozen
Inside Out
Ender's Game
Pacific Rim
About Time.
In Time.
Sully
Belle
The Searchers
The Hunger Games
Superman Returns
Milk
Chaplin
Maggie
Locke
The Place Beyond the Pines
The Croods


I'll come up with a more complete list later.

I remember thinking that I had a harder time understanding movies at the bargain theaters in Salt Lake City.
https://www.slashfilm.com/673162/heres-why-movie-dialogue-has-gotten-more-difficult-to-understand-and-three-ways-to-fix-it/
Posted by John Coffey at 4:15 PM 0 comments