WHY 120FPS WON'T LAST. FRAME RATE COMPARISON. What should you shoot with?

David Arthur
1 month ago
At 24 fps, you see dwarfs fighting goblins. At 48, you see men running around in silly costumes. :) 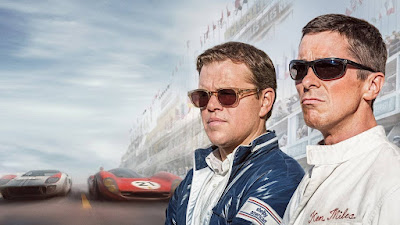 Henry Ford II, along with his executive Lee Iacocca, decided to get the Ford Motor Company into auto racing with the intent to win the 1966 Le Manns sportscar world championship, partially because of a feud with Ferrari. They contracted sports car designer Carroll Shelby and his soon-to-be-legendary British driver Ken Miles.

The good parts start about 50 to 55 minutes into the movie.  The problem is the very long setup that, probably for historical reasons, introduced so many characters that I didn't care about any of them.  Once the movie focused on the two principal leads and their relationship, it gave us an additional 90 minutes of really good entertainment.

Both Matt Damon and Christain Bale portray characters unlike anything they have done before, and Damon seems to shine with a very mature performance.  Bale does a good job too, but I didn't quite buy his British accent.  However, maybe the joke is on me since it turns out that he is a British actor.  I am used to seeing him with an American accent.

Almost all the supporting performances are very good.  Tracy Letts stands out as Henry Ford II, and Jon Bernthal, known for his television roles, does a good job as Lee Iacocca, the man who gave us the Ford Pinto, portraying him as the bad guy who is always getting in the way.

Rating B.  The film has a 92% rating on Rotten Tomatoes, but that first part is a slog to get through.

Dune Blows Away All Expectations! The Reviews are In!

I thought that Dune would be a tough novel to adapt to the big screen.  Frank Herbert wrote weird books.
https://editorial.rottentomatoes.com/article/dune-first-reviews-the-breathtaking-adaptation-fans-have-been-waiting-for/
On September 24th, Apple TV releases a Foundation miniseries based upon the Isaac Asimov books.  They weren't the most exciting books.  More cerebral.
Posted by John Coffey at 10:49 PM 0 comments