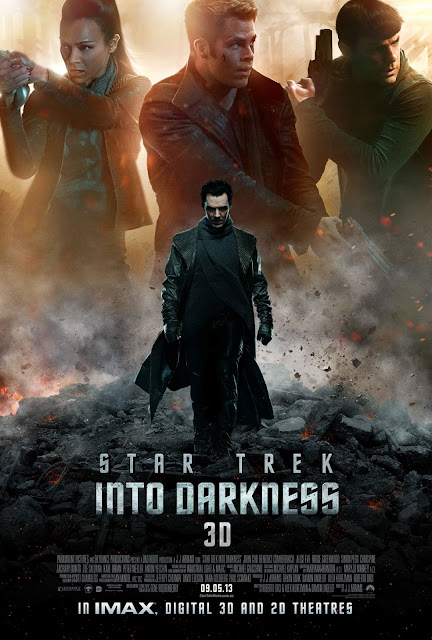 Star Trek Into Darkness has a secret that isn't revealed until about 40% of the way into the movie.  Up to this point I was pretty interested in the terrorism plot, but then suddenly the movie shifted gears.   I notice that other reviews have not revealed what the secret is except to say that the movie recycles, or pays homage to, some material from previous Star Trek movies.  So the secret is that the movie is a bit of a remake.  Although I enjoyed the movie, all the advance publicity lead me to believe that it was going to follow brand new plot lines.  It would have been a slightly better movie if it had.

The trouble with remakes is that they tend to not be as good as the originals.  Some examples are The Amazing Spiderman, Total Recall, and Planet of the Apes.  Star Trek Into Darkness reminds me of Superman Returns which was a pretty good movie but had a schizophrenic personality because it tried to be both a sequel and remake.  This is what happens when a sequel too closely resembles one of the previous movies.

That isn't to say that Star Trek Into Darkness isn't a terrific science fiction action film.  The movie looks gorgeous.  There are enough action sequences in this film to keep audiences happy and maybe coming back for repeat viewings.  This is likely to be a blockbuster hit for awhile until it gets replaced by other summer blockbusters.

Zachary Quinto is so convincing as Spock that I never once during the movie thought to myself, "Hey, that's Zachary Quinto!"  Chris Pine is mostly convincing as Kirk, but it is not the same as the William Shatner performance.   He is more of a manic Kirk.  John Cho makes for an interesting Sulu, but most of the other characters come across as mere parodies of the original characters.  Karl Urban manages to be half convincing as Bones.  It is the chemistry between Kirk, Spock, and Bones that makes the movie work, although mostly it is just the chemistry between Kirk and Spock that does the job.  It seems to me that in order for this franchise to suceed, the other characters are going to have to step up to the plate and be a little more believable as the Star Trek characters that we know and love.

'Alex Kurtzman and Roberto Orci are two of the writer-producers behind "Star Trek Into Darkness," but the team known as "K/O" is also producing the coming films "Ender's Game," "Now You See Me" and the Fox television series "Sleepy Hollow." Not to mention the sequel to "The Amazing Spider-Man," which they co-wrote and which is currently filming around New York.

Speakeasy talked with Kurtzman and Orci, who have been friends and writing partners for more than 20 years, starting with the television series "Hercules: The Legendary Journeys."

"It's funny, it used to be a binary, like he's Spock and I'm Kirk, in terms of personality," Kurtzman says. "It's not quite that simple anymore. I think when we first started, Bob was more about logic and logic flow, and I was always about the emotion of what was going on. Now, having written together for almost 22 years, our voices are in each other's heads to such a large degree that it's very difficult sometimes to distinguish between the two."

What were some of the challenges you and director Gavin Hood faced in adapting Orson Scott Card's "Ender's Game" into a film?

Orci: "Ender's Game" was a book that we both loved from teenagehood. It was published in 1985 and I think we read it in high school, maybe even earlier. The challenge with the book is it's very internal in that a lot of the narrative that occurs is within the character's head and the trick is, how do you dramatize that? The answer is both through having some of those internal struggles be dramatically shown as scenes, and second, we have an advantage that the book does not have, and that is actors. We have great actors who can not only say things, but play things and play reactions on their faces and actually convey a lot of the emotion of the book. Thankfully now we have the technology to make it the grand adventure that it deserves to be. We have the technology to render a Zero-G environment in a totally believable and incredible way.'

RE: Hitchcock the movie

I haven’t seen the movie, but Hitchcock had a reputation for disrespecting women, maybe because of marital problems.  There is a scene in Frenzy where a couple meet at a matchmaking service and the woman immediately starts telling the man that he has to change.   According to one documentary, Hitchcock often portrayed women as controlling.

Not sure how much is factual but now I need to watch Psycho again.  The story centers around Hitchcock getting Psycho filmed and produced.  And I sure do feel old because I remember watching Alfred Hitchcock Presents on TV.

There is a scene where the guy is reading Ernest Hemingway’s book “Farewell to Arms”.  He gets so disgusted with the depressing ending of Hemingway’s book that he throws the book crashing through the glass window landing out in the street.

Unlike Hemingway this story ends pleasantly.

https://www.youtube.com/watch?v=X07xNrVd7DU&feature=youtube_gdata
Posted by John Coffey at 12:14 AM 0 comments